Lately there has been a normal average of about 2 to 5 large international headlines per week. Today we have 3 all at once. What I define as a big headline is something that indicates a shift from the current course of the news. Note that the “course of the news” and the “course of events” are two entirely different things, related only in the same way dreams are related to the realities of the day you just experienced.

Example: The TV already taught us that US soldiers are being killed in Iraq, more news about dead soldiers isn’t news, its merely reinforcement. If the TV told us that no soldiers died in Iraq for a month, that would be news, and I would define it as a large headline.

To contrast these “big” and “small” headlines with something else that goes on in the news business, check this story out. It is, strictly speaking, a blind shot at generating some extra violence to report about, the same way a troll comment is a desire to start a flame war on an online forum or newsgroup. I categorize this firmly in the “stirring the shit” news section. Somebody wants a left-wing nut to get upset that a nice thing is happening to a bad person and take a shot at the guy who killed peace-minded Yitzak Rabin (who, upon being assassinated became the voice of all that was good and decent, as opposed to his previous designation in life as “just another warmongering Jew” by anybody with a grudge against Israel, media included… death changes you, and not just encaphalographically… it renews your agenda completely along with your social calender)

That being said, today we have three major headlines, all arrayed together. This is significant, but I can’t see why just yet. It is unusual for this many things to happen all at once. So here they are:

Lawyers, not just the normally socially retarded population of Pakistan, are demonstrating publicly against Musharraf. Why is this big news? Because they are not the usual demonstrators. This goes along with the closing of major newspapers, suppression of the constitution, etc. Musharraf isn’t going to give up control easily, because if he does, his days are numbered. Of course, if he hangs out in office and continues to piss everybody off as he is, his days are numbered anyway so… Whatever. The most significant thing to take away from this is the average Pakistani’s perspective. From where they sit, the absence of an evening newspaper or any independent news reporting is all the news they need. This will get interesting. Who knows how it will turn out for US interests…

Turkey’s PM is meeting with Bush personally about squishing some US allies / claiming a stake in Kurdistan. You can bet this meeting isn’t simply about cross border raids and the US helping or not helping Turkey with the rogue elements such as the PKK. Turkey is eyeing a controlling stake in the future official version of Kurdistan they feel is forming. I’m sure this meeting has a lot of folks biting their fingernails in Kirkuk. On the one hand, Turkey has had problems with the Kurdish version of political rebels and self-determinists for a long time. On the other hand, Turkey already owns about 60% of what Kurds consider their traditional area; if they have problems now, they’ll only inherit and later create more problems if they decide to “secure” more Kurdish areas at this point. They’re not ready, it will intriduce another variable into the Slice-Up-Iraq-Game the adjacent countries are playing, and will likely not be in anybody’s best interests at all. It just sounds good inside the Turkish government to talk long and loud about whipping some Kurd ass. I expect Bush will focus on this when he talks with them and highlight the downside for everybody, Kurd, Turk, Iraqi and American. Some half-assed csomething is being done about those damn Kurds.

Kim Jong Il North Korea decided to begin disabling his its nuclear facilities. Kim Jong Il North Korea is the second most destabilizing factor in the Middle East, one step down from the continued adherence of millions to a death cult that outlived its founder. Not sure what went on here, but I bet its a fun story. In celebration of this huge step forward (the Great General never take a step back, so I hear) a Gloriously Tiny Piece of Immaculately Grimy Garbage blew idly across Pyongyang’s empty Great Common Square of the People in the Wonderously Icey Wind of the Democratically Fucking Cold People’s Winter in the Democratic People’s Republic of Korea. Going on a State visit to North Korea Being Kim Jong Il’s Wonderous Official Guest is an exercise in witnessing strangely juxtaposed sad realities. Creepy. Everyone should give it a try. Anything that would convince the smart, but somewhat deluded, Great Dictator to take physical steps against his nuclear program must have been interesting or at least very funny. That is a strange guy, and the whole country mandatorily reflects his weirdness.

And in other news… a mummy is about to become reanimated and destroy most of Egypt. A public service announcement was issued by Hollywood experts about the dangers of this 3 times already, but obviously nobody listened. Watch out for King Tut… he’s coming… 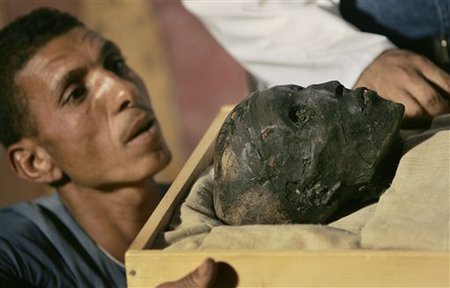 And holy crap, the guy unveiling his face really is one of his relatives! Talk about resemblance… of course, that would mean this man was Coptic, but they don’t exactly have much of a political voice in Egypt these days… or jobs, either… But who knows/cares about them anyway, eveybody knows Muhammad built the Pyramids with his Holy Talent of Slave Driving. You only get that when you put 61 points in the Evil Prophet talent tree… Don’t know what I’m talking about? Gotta wait until the expansion comes out, its in beta right now. [Hopefully the WoW reference didn’t miss everybody… or the historical sarcasm…]