Musharraf has finally done it. He crossed the last line of acceptability in his struggle to retain power to the bitter end. He has arrested the opposition leader in Pakistan and set the stage even more firmly for a flagrant violation of his own Constitution… or not, that’s right, he already overrode it citing some civil neccessity for something or other. So the beatdowns of the last week have been legal, but arresting the opposition leader wasn’t. At least not in the international court of let’s-tell-you-how-to-run-your-own-country, and no it doesn’t matter how big of a crook Bhutto actually is. If that were a standard for silencing opposition, there would be no third world political structures to speak of (and little in the second or first, for that matter…). 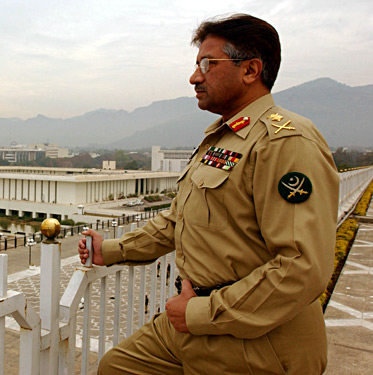 One thing dictators (or Democrats, for that matter) never seem to understand is that losing an election does not mean that your country is becoming undemocratic, it simply means that less voters aree with you than you had hoped. In other words, dictators (and Democrats) tend to have a difficulty distinguishing between a threat to their political dominance and a threat to the democratic system. I find that terribly funny.

Things could have turn out differently. The international community is tired of dealing with little brown guys who screw over all the other little brown guys in their dirty, chaotic countries so it would have been completely acceptable by modern political standards to forget about the recent opposition crackdowns in Pakistan and label them as “police actions against civil disruption” or some other polite nonsense.

Elections would be held, Musharraf would lose, or rig the election win, or whatever, but either way he’d be in one piece at the end of the day. If he won he’d still be in charge of his part of the third world and continue to enjoy all the perks stepping on the less fortunate in smelly countries affords a dictator, and if he lost he’d be living comfortably in England or someplace else conveniently distant from the social chaos and depravities he presided over. He could write a book and make millions selling fantastic lies about what an amazing lion he was in the War on Terror. The guy’s rich anyway. I’m sure the Pakistani’s would pay him to leave in any case.

But now he’s gone and put his foot right in it. The US was trying hard to not pay any attention to his recent behaviour and continued to push the idea that he’s no longer an oppressive dictator but a rehabilitated, benevolent dictator, a true ally in the War on Terror and a patriot who supports the causes of the average Pakistani.

Well, that’s gone and the US will have to do something about this. It won’t stand by and let that many people get worked over for that long, not when America is already heavily engaged with that country. Of course, the Pakistanis won’t care to thank America once its over and will continue to plot on American soldiers and desire to murder all non-Muslim inhabitants of the Great Satan… but America will at least guarantee that its a democratically elected Islamic leadership that wants to kill all of us infidels instead of a dictator who allows only a mere fraction of the America-killing sentiment to be heard.