The Ukrainian President, Viktor Yushchenko, has made several moves toward joining the West and separating from Russian influence. There are internal debates about this but overall it seems that pro-West influence is rising and generally the public seems to realize that life under a Western-style capitalist, decentralized and democratic government tends to be more prosperous and enjoyable than life under a socialist, centralized, authoritarian one — particularly when the primary governmental influence comes from Moscow, which is not even in Ukraine and therefore does not hold Ukraine’s or Ukrainians’ best interest at heart. 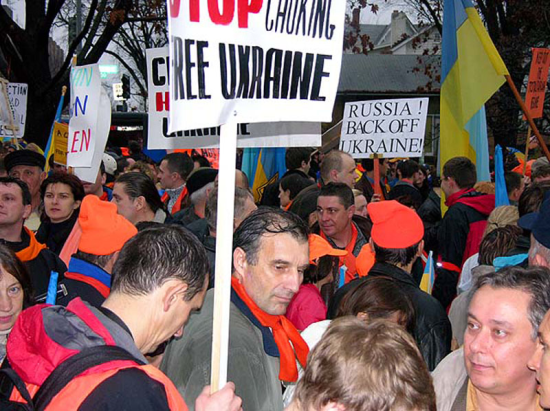 [Interestingly the above demonstration was held in Washington, D.C. in 2004]

Ukraine separating from Russian control worries Putin and his organization very much because the western half of the former Soviet Union was where most of the cities, technology and economic activity were centered, a large portion of that being in Ukraine near Kiev. Cutting this part off of the Old Empire removes roughly 1/4 of the former Soviet’s power-generation, urban, technical, educational and economic infrastructure. That is a frightening loss for Russia right now, particularly since they are maneuvering to engage the U.S. in something amounting to Cold War II (all over again! Oh noes!) while the Americans are distracted by Iraq, Afghanistan and general Muslim chaos. Nobody likes to a lose large part of their “side” right before a fight… particularly when the lost part could become an asset to the other side. Make no mistake about it, Russia absolutely thinks of the Ukraine as “theirs” in the old Soviet sense.

I also believe the mafia elements headquartered in Russia are worried about the Ukraine joining NATO. While not all NATO countries are as settled as Britain and France, becoming a NATO member tends to open the door to eventual EU membership, greater participation in Interpol, and an associated loss in the ability to corrupt enforcing officials and therefore an accelerated loss of mafia traction in an area. All of these changes would take years to mature but considering the mafia tends to think of itself as a second government operating independent of international borders a change in actual national leaning from well-understood East to less-understood West would create a long-term shift in policies and popular prosperity and out-date the mafia’s current methods. Organizations, once successful, tend to resist change and be defensive rather than offensive. They shift their focus from creating success to not creating failure and this forces them from a proactive to a reactive stance. In this mode the mafia would not be very well capable of organizationally shifting to cope with the major changes that membership in NATO would likely precipitate.

We have two groups which consider themselves to have Old Empire controlling rights in Ukraine, the mafia and the government of the Russian Federation, both desiring to see Ukraine move squarely back under Eastern/Russian influence. We have Europe, the seat of the majority of NATO voting members (but not actual NATO might, that is almost all held by the U.S.) greatly dependent on Russian energy exports. We have the United States, the majority power wielder in NATO (but representing only one real vote), interested in preempting the Russians immediately by splitting the potential opponent power base before they’ve consolidated and Cold War II becomes an inescapable political reality. And lastly, we have the country of Ukraine still trying to find its political and economic equilibrium since the upheavals of the Orange Revolution.

How will all this play out? The Ukrainian President had originally called for a decision by popular referendum to happen soon. Then he changed his mind and delayed it for two years. Why would he do that? There is a presidential election between now and then and he could even be running against his vice-President in that election which might split the pro-West voters. This doesn’t appear to make sense. Giving some thought to events inside and outside of Ukraine could give us some insight.

First, let’s consider what the Eastern side wants (and here I include both the Russian mob and the Russian government). They have considerable indirect control over the Ukrainian and European economies. Europe is dependent on Russian energy exports, the Russian government can control that flow, and importantly most of the Russia-Europe pipelines run through Ukraine which could give the Russians many public excuses to embargo or otherwise cut off energy exports. Cold War phraseology comes to mind: security concerns, abuse of whatever, tax issues, domestic needs, etc, anything to avoid saying they are attacking Europe for trying to “steal” a territory that they believe is “theirs”. The mafia controls many other industries in effect and could impose a different sort of embargo on financial and commodity transactions, or simply hamstring foreign business interests in the country if they decided to suspend infighting and work together to that end — and I believe the Russian mob is sharp enough to catch on that this would be a benefit to them.

Europe, for its part, is interested in defusing the upcoming cold war, but not as much as the Americans are. The Americans are used to making sacrifices on behalf of everyone else to maintain the stability which continues to buoy Western primacy. Europeans and their governments have grown massively complacent over the last 60 years because of this and tend to not recognize that true diplomacy carries with it the exact same costs as war. I do not believe that Europe will stick together in the face of an anti-European energy embargo from Russia or even be willing to face the disruptions to business that mafia interdiction could represent. Europe is too used to “soft power” and still believes that it means something. Power, “soft” or “hard, is power, and power is always a double-edged sword that must be wielded delicately and with finesse. They simply don’t have the balls to avert a future cold war and as much of European history has shown this aversion to early and preemptive confrontation generally results in overgrown tensions which explode into orgies of violence or popularly disastrous economic and governmental actions in last-ditch efforts to diplomacize their way out of sudden-seeming impending wars — and usually both at once. They will recognize the need for something to be done and understand the benefit of pulling the Russian’s legs out from under them early on by stealing Ukraine away but just won’t gather enough organizational momentum to do so.

The U.S. wants to push the issue very hard but are distracted by the Middle East. The Russians want to push the issue very hard while the U.S. is distracted because this is their only chance to really win any last-minute strategic gains prior to the U.S. being able to focus attention on the impending Cold War II-type conflict. If the Ukrainian NATO referendum were to happen right away with Ukraine not stabilized socially just yet, the Russians fresh on the heels of a centralizing consolidation of domestic and economic power, the Europeans sounding noisy but in fact remaining so typically and ineffectively lukewarm, and the Americans distracted so there is no way a clean victory would emerge for either side. This would leave Ukraine naked in the middle: without NATO membership and protection on one side, with a suspicious and subversive (bordering on hostile) Russian Federation on the other, and the Ukraine likely economically and socially ravaged by the economic and energy embargoes and other destructive global political tools playing out not in the NATO, UN or EU chambers as people see on TV but on the streets and in the business environments where they are realized. That is untenable for Ukraine, though likely a relatively balanced outcome in the view of the U.S. and only a slight frustration for the Russians over the long term.

Yushchenko wants to delay such a fight because it is simply not worth the cost to his country for the non-decisive outcome that would likely result.

He is obviously pro-West and would like to see the NATO bid bear fruit. With the U.S. already having accomplished most of its goals in Iraq, making end-game moves in Iranian and Syrian negotiations, and posturing to merely maintain pressure on Afghan/Pakistan issues, it is very likely that within two years the U.S. would be in a position to significantly influence the outcome of a Ukrainian referendum if it were to happen two years from now. This is what the Ukrainian President is betting on. Russia accepts this because it gives them two years and a known target date to work towards in influencing the public and private sectors in Ukraine to pitch in with them. The U.S. accepts this because it gives them the same opportunity and further gives them the chance to consolidate its political and military forces prior to having to face serious confrontation with the Russians. The Ukrainians like this because it gives them the chance to benefit from the attention of two great powers and pick an exit between now and then instead of racing to one in their current, unstable and unsettled state.