Everyone! You can stop thinking for yourselves now if you haven’t already, noted genius/political scientist/played-out rock star Bruce Springsteen has endorsed Barak Hussein Obama for President today. We all know he was very much boooorn in the U.S.A. and all, and he wrote a lot of songs but why is it that so many people give such creedence to the political and “scientific” opinions (think global warming and energy, healthcare or land policy) of people who have spent their lives on stage putting on imaginary shows over those who have spent their lives engaged in the study of or at the center of real issues? 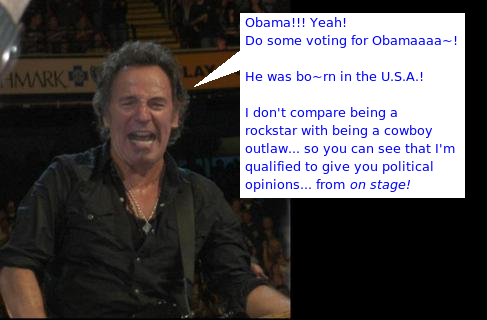 Of course, when it comes to politics, I think it is interesting to note that by and large the people who are successful politicians are not the most well studied, either. In fact, it is further interesting to note that we vote on political candidates largely not based on their qualifications relative to the job at hand, but rather on how well they perform on stage (i.e. campaigning). With this in mind, I suppose it isn’t so peculiar that we, as a culture of lazy-thinkers, should place such emphasis on the political leanings of such completely unstudied persons as George Clooney, Ben Afflick, or Bruce Springsteen.

Anyway, back to the matter at hand, Springsteen “endorsed” Barak Obama today, but that is a pretty meaningless gesture. If I were to “endorse” a candidate today, it wouldn’t make a bit of difference because I have absolutely zero control over the functions of any political party, nor do I have a large public voice (rather a small public squeak). So why is this newsworthy? Because Bruce Springsteen is a household name and the people who are flashing his name across headlines everywhere are clearly in support of Barak Obama themselves. It is absolutely not newsworthy that a singer supports one candidate or another, any more than the guy living two streets down does. Who cares? The editors sure do. You didn’t see any big news come out about who is (meaninglessly) “endorsing” McCain, even when the Republican nomination was up for grabs.Â  The press is just did not really have their heart in it.

Enough picking on senior editors, singers, actors and other people who have very little background from which to tempt the influence of my political views…

What does all this mean?

The Republicans know they are in for a serious fight for the White House, even if The Jeezus Himself was going to run against Dukakis this year. The country is generally split on the war, and in that way the domestic issues are all going to take a back seat to foreign policy issues. Because of that the Republicans want to have an easy opponent when November comes. They want the least qualified, the least informed, the most emotional and immature opponent they can get, and between Obama and Clinton, Obama is that guy. For proof of this one need look no farther than what the conservative media is saying about the Democratic candidates. They are throwing campaign grenades at Clinton as fast a possible, but have the training gloves on with Obama. It is pretty clear who the conservatives want to see McCain face-off with, and it is not Clinton. They will likely get their wish, as the “I’m have a vagina” card isn’t nearly as effective in this day as the “I’m black and have a Muslim name” card is with the thoughtlessly apologist left. Obama has played this position to its fullest by not drawing attention to it, and that has worked out well.

Clinton — or someone on her staff — knows too much about the way the world works and understands the interactions and long-term strategies of the United States (with regard to the war on terror, the upcoming Cold War II scenarios, China rising, Asian security postures, energy policy, the fight over maritime and space dominance, etc.) to be a pushover in the real debates which are set to begin in a month or so. Obama is playing catch-up and is largely clueless about most of the issues I mentioned above. He speaks in absolutes and is generally uncompromising in his strong remarks without the benefit of knowing what he is talking about. In short, Barak Obama sounds a lot like he is running for Student Council, not President of the United States — the leader of not just the “Free World” but also the implementer of a massive and diversely nuanced foreign policy. It is a post that requires enormous amounts of information, consideration and council; which is all background information that he does not have. John McCain is prepared for it as is Hillary Clinton, though McCain’s domestic policies are far more realistic and informed than Clinton’s. Their foreign policy is nearly the same though, and Clinton being a woman and a not-Republican will have a distinct advantage in the current environment, no matter what she says, during debates which will focus enormously on foreign issues (despite current campaign rhetoric to the contrary).

Obama will have an advantage too, being also a not-Republican and somewhat black. Note that I’m saying “not-Republican” with specific intent: nobody likes the Democratic Party right now, not even the Democrats. The Democrats are torn internally right now because of a series of image and political issues. Most of the issues stem from being so vehemently anti-Republican and anti-Bush has caused them to entirely cease being pro- anything. In being such anti’s they have robbed themselves of any platform at all, so it is very appropriate to say not-Republican as opposed to being an actual Democrat in the current climate. This was reflected in Obama’s somewhat contrarian campaign slogans of “Hope”, though he absolutely resisted the urge to ever reveal what anyone had to be hopeful about under him.

Anyway, lots of support for Obama from the right and left. This is natural given the current circumstance. After he wins the nomination expect all of that to change, swiftly. The media will still support him but remember that the reason the right hasn’t been saying too many nasty things about him so far is not because there are not nasty things to say — it is merely because they want to save their ammo for later when their shots will count. Their shots on Clinton count right now and the anti-Clinton fight will very likely soon be over, so they’re using up all their anti-Clinton devices right now while it means something.

Of course, since Bruce Springsteen and F.A.G. are on the Obama wagon now (meaninglessly, along with most of the residents of the Land of Makebelieve), he just might pull off a victory in the general election. If that happens be prepared to see him do his best… and that really simply means watch him get very, very quiet for a long time. When he gets into office and is suddenly privy to all the information and analysis he has not yet been exposed to (keep in mind he is a new senator and is not a member of any special committees, but Clinton and McCain both are) he will realize how deep down the rabbit hole he fell and will certainly appreciate the need to pick his way carefully out of it. This is what Russia and China are praying for: a weak, uninformed next U.S. President. If Obama comes to office, expect to see U.S. power placed in a holding pattern while the other two big kids make big moves, and Europe starts to strain against the flow (what that means is entirely beyond the scope of this already meanderingly huge article). The U.S. can recover from him later on, but it will take some serious doing, and in the weird world of geopolitics four years can be a very long and short time all at once.