Aggressive stances don’t usually come out of Israel, despite what the press likes to say. Without committing to overtly offensive maneuvers in the region, though, Israel has had some strong things to say to neighbors and even allies lately, and has committed to some very serious military and social exercises. All of Israel’s maneuvers and exercises have been training-only, and all have been focused strictly on defense, but it is important to understand that anything Israel does is closely watched by its Arab neighbors and any sign of Israeli capacity is regarded as a threat, whether the capacity is defensive or offensive. The countries surrounding Israel do not have peaceful intentions for that Jewish state, regardless of the Israeli live-and-let-live national policy and military posture. The Arabs want the Jews dead, and any sign that Israel won’t die easily is therefore viewed as a threat. Israel is well aware of this perception and has used the recent civil defense exercises as an opportunity to evaluate its actual national survivability in the event of a massive air, missile or unconventional (NBC) attack on the country as well as deliver a silent message of collective strength to its neighbors. 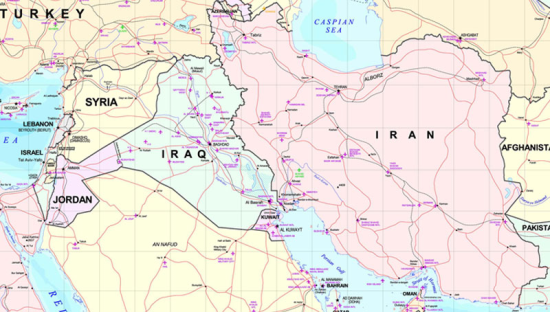 Why would Israel feel the need to make speeches about “non aggression” — which are always, no matter who is talking, regarded as speeches about actual aggression — and conduct massive military exercises to demonstrate their strength, organize for action and prepare for conflict? Further, why would Israel be more focused than usual on the Hezbollah threat in Lebanon? Why would Israel have recently bombed suspected nuclear sites in Syria? Why would Syria be posturing in such a way as to demonstrate their military weakness? Why would Hezbollah be all talk and no action even after the assassination of one of their prime leaders?

There is a pattern emerging in my view, but the meaning of it cannot be found here, strictly in the local region of Israel, Lebanon and Syria. The bigger picture here leads back — as almost all roads in current Middle Eastern intrigue seem to — to Iran.

Iran has has a rough time of things lately. They’ve overplayed their hand with the Americans; their militia groups got so smashed in Iraq that they became confused, frustrated and even reverted to the old factionalized fighting that split and weakened the Shiite community in Saddam’s Iraq; the Iranians lost enormous amounts of material and money supporting Hezbollah during and after the recent Israeli attacks into Lebanon; they’ve lost political clout by presenting themselves badly to the Russians; thei nuclear program pissed everyone off with no gain for them; etc. The list goes on and on. Irans’ sucking, and they’re showing it.

Iran has their military celebrations scheduled very soon, and during those everyone will be able to see the “Iranian military might”, which is really not that much to speak of in American, British or even Japanese military terms, but relative to the other potential opponents in the region is considerable. But the Iranian military, while it might look good in a parade and scare the weak Saudis, is built for domestic control, not offensive operations. The Iranians have plenty of self-policing to do and the military, not the police, do this sort of work inside Iran. The real offensive arm of Iran is Hezbollah, which though it often seems more like a drug cartel than a normal terrorist group, is supported and organized by the Iranians and acts internationally as Iran’€™s offensive military arm in everything but name.

How does this connect with Israel? First, in the most obvious sense, Hezbollah is hellbent on destroying everything Jewish in the world. That brings Hezbollah into direct conflict with Israel to begin with. But Hezbollah has been based in Lebanon for a long time and has focused almost exclusively on anti-Israeli campaigns. There are lots of groups that fit that description and while its a scary phenomenon when taken all together, individually there is no single group that makes any Western government tremble, and none of these groups can independently have any strategic impact. They simply spend too much time infighting and worrying about who follows what prophet’s cousin or whatever to really get a hold on things. They’re too disorganized.

But Iran is hoping to change that. Hezbollah is undergoing a massive expansion, an expansion most people aren’t seeing because they think Iran does not have the capacity for it due to its almost entirely distracting American involvement — and granted, America does have Iran surrounded on both sides. But Hezbollah is not Iran. Hezbollah runs itself, is funded in part from drug smuggling into Israel (what they would do without that money if they actually did destroy Israel and all its recreational-drug-enabling economic weight is an interesting question), but it is an independent organization which is not totally dependent on Iranian instruction. They can make their own decisions, develop their own situations, and act on their own. With that sort of independence and the organizational experience and skill Hezbollah has accumulated over the years it is entirely plausible that Hezbollah could be receiving material support from Iran with broad and ambiguous instructions to conduct a regional expansion into all Shiite communities in the Middle East and act on such guidance all on its own without wasting much Iranian brain-power or leadership bandwidth.

Whether Iran told them to or not, this is what Hezbollah is doing: expanding at an unprecedented level. There are new Hezbollah organizations springing up in Kuwait, Qatar, U.A.E., Iraq, even Saudi Arabia — which much be tricky going for them. They are hiring away highly experienced and like-minded Palestinians who do not ordinarily have anything in common with Iran or Hezbollah other than wanting to murder Jews. This is a new trend that has never been seen before.

Sure, Hezbollah has operatives working in Southeast Asia, Europe, etc. But these are Hezbollah operatives working out of Lebanon or Iran and conducting specific business in these areas, not new Hezbollah organizational structures headquartered in such far-flung nations acting under broad guidance from Hezbollah Central Command. An indication of this trend and of Hezbollah’s truly independent nature is the process of new Hezbollah regional cadres being moved to the Bekaa Valley in Lebanon to be trained at Hezbollah’s main bases instead of Hezbollah cadres being moved to Iran for training. In the past, Hezbollah sent people from Lebanon to train in Iran and Iran sent Republican Guard units to Lebanon to train and support there. So now we see the shift that Hezbollah is running more and more of its own show, and basing operations in Lebanon, away from Iran, with an obvious eye to expand out all over the Middle East.

To what end are they conducting this expansion? Iran’s stature has fallen recently. As discussed above, they are in a tough situation with the U.S. and they know they have lost this round. They know they will not wind up getting absolute control of the Iraqi government. They will not be able to put up bases across the sand from Saudi oil fields. They will not be able or allowed to do a lot of things they want to do under the banner of Iran for Iran’s sake, so they are standing up regional Hezbollah brigades to make up for their lack of future overt military capacity and power projection.

This is where Israel comes in. Iran is Israel’s sworn mortal enemy. Anything good for Iran regionally is bad for Israel’s future prospects of existence. Israel does not want to see Hezbollah expand to the point of having regional headquarters and local battalions scattered from Southern Europe and North Africa to the Persian Gulf.

The situation is too confused right now to predict the actual effect of such an expansion, but it is certain this would be bad for Israel somewhere down the line. So Israel is looking to cut this movement off before it really gets started. Expect an attack by Israel against Hezbollah once the intended future big names of Hezbollah are collected in Lebanon. Hezbollah needs Lebanon as a base. If it is denied that, it has nowhere left to go. All its infrastructure, civil support, hospitals, drug lines, etc. are there. No country really wants to host Hezbollah, and Iran cannot host Hezbollah and maintain any separation between their own military and the Hezbollah force nor can they evade responsibility for Hezbollah’s actions if they become the primary host. Israel knows this and so before any other country becomes sufficiently infected with a firmly entrenched Hezbollah presence Israel is looking to attack, weaken and distract Hezbollah from its expansive plans now rather than fight them from all angles later.

Syria wants to stay out of it. Assad’s regime is weak and everyone knows that. Israel does not want to knock Assad down because while today’s Syria might be irritating, it does not pose a real threat to Israel. Israel could wipe Syria off the map with a conventional invasion force, and this power imbalance acts as a stabilizing influence on the situation between them. Assad wants to stay in power and he can’t do that if his country is destroyed, so he will not actually commit to an attack on Israel. Israel does not want to deal with managing an even more agitated and radicalized Syria after an invasion of the country, so to avoid muddying the waters the policy of both nations is live-and-let-live. That is why Syria conducted maneuvers recently near the Golan Heights: to make Assad appear resolute and powerful to his own people, and at the same time show Israel just how weak he is so the Israelis don’t make the mistake of accidentally or inadvertently knocking his regime over with a few military strikes inside Syria.

So what is the “emerging pattern” Hezbollah is looking to expand all over the region in a serious way which will allow Iran to comfortably accede to an American-dominated Iraqi government while they develop their local state-within-a-state Shiite structures all over the region through Hezbollah. Israel is looking to prevent this potential expansion right now which will be a severe blow to Hezbollah right now, but also a critically damaging strike to everything that is future Iranian regional dreams of hegemony.