Its the end of day 3 and I am feeling just fine. Tired, but I always feel tired after boxing and not sleeping quite enough. That is my fault, not McDonald’s. As far as that goes I feel exactly the same way I felt two weeks ago when I was eating normal food. I had imagined that I would feel at least a little different by now.

As things are the only thing I wish I could change is how many hours there are in a day. Living a relatively normal life with typical daily responsibilities and engaging as fully as I do in an exercise hobby fills my day pretty completely. What I had not anticipated was that it fills it so completely that there is no way I can even screen each day’s video, much less notate and edit any of it. 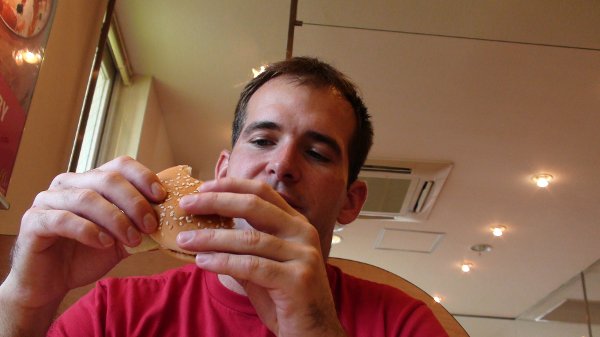 I am going to nom this…

That being said, on the technical front I have to report that the Sony HDR-CX12 camera I’m using is a pretty amazing gadget, but on the downside the video compression used is highly proprietary and there are few tools out there with which to edit most of this in a timely manner. I have found a partial solution, and probably the one I’m going to stick with for the short term. Because this is a video production which will never see the big screen and which will likely never make me any money, I am satisfied with using the tools included with Ubuntu Studio (on, of course, Ubuntu) and Kdenlive (on either Ubuntu or Fedora) to do batch transcoding from the proprietary MTS/M2TS AVCHD format that the camera spits out to a far lower res, but easier to edit format. Since this will primarily be viewed inside of Flash movie player frames tucked inside whatever part of thesite I build to house all the other data that comes out of this project I don’t think the general public will be missing much. I’ve heard a lot about Cinelerra and that its a great movie editing suite, but I just haven’t had the time to mess with it yet. 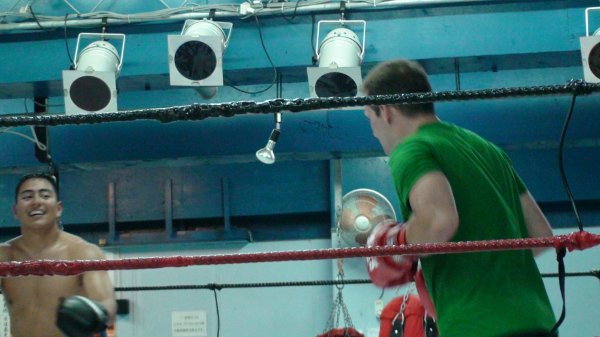 Offense/Defense practice at the gym… Yay!

Hopefully when shooting is over and I can start eating normal food again I’ll have the time to start editing this thing for release here. The worst part of that will be distilling it down from the enormous pile of footage I will have on my hands to extract the most pertinent scenes to show the audience. In the interest of completeness I might offer the whole shebang for people to download just in case there are any questions as to the vailidity of my experiences (be warned, full verification of my McDonald’s eatingness would entail viewing 30+ hours of just me eating burgers and even more hours than that of me in the gym, running or boxing… pretty dry).

I wish I had the time to write a diary about this every day, but I do not see that happening unless I find a way to schedule it in, which would mean arriving at the gym for my evening session at least an hour or two earlier than I am now.