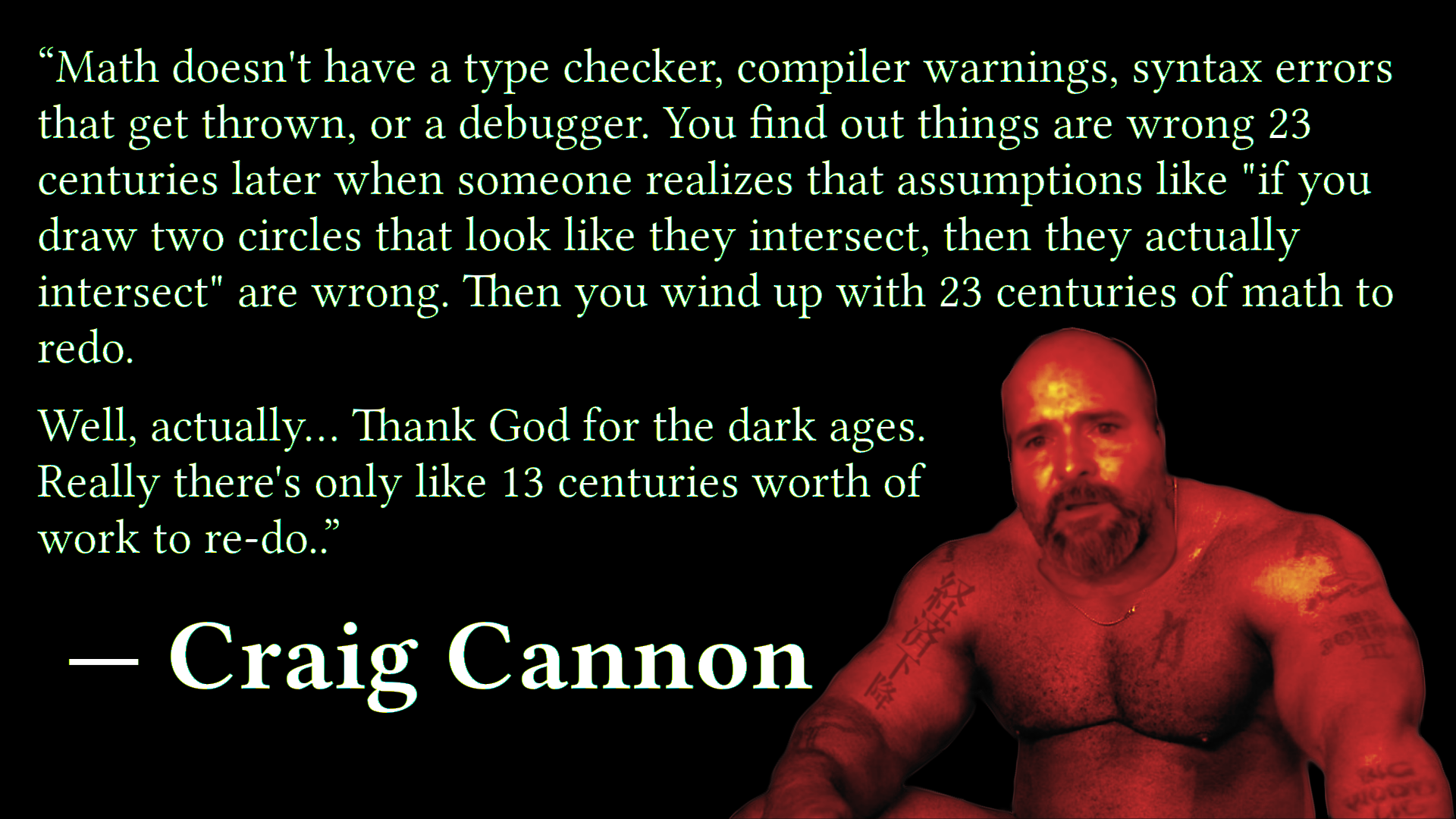 I may or may not stick with this. I am having horrible writer’s block trying to write this all out in a LaTeX PDF, Erlang, my videos, or in my Revelations. So I’m trying the blog medium. The blog has the “fire and forget” property. So we’ll see.

QAnal is my fork of mathematics. QAnal is short for “rational analysis”.

The impetus for this was about a year or so ago. I wanted to do a video explaining Gaussian elimination and neural networks with some code (still haven’t done that hundreds of videos later). I got the sense that both ideas were intrinsically very simple, just poorly explained. Mostly because those explaining the ideas didn’t really understand them.

The first thing I realized was why nobody gives code examples of Gaussian elimination: CIA floats. Gaussian elimination is a very mathematically (and computationally) straightforward algorithm. But it requires a lot of division. Something that computers are weirdly bad at.

Implementing rationals is easy in a language that has built-in bignum arithmetic like Erlang or Scheme. Scheme actually has built-in rationals

But doing this in a language that doesn’t have built-in bignum arithmetic means you have to implement bignums yourself (or face overflow/underflow issues). And that’s a task beyond the capacity of almost anyone writing a math explainer (most of whom would struggle writing “hello world”).

So, as someone explaining Gaussian elimination, you have three options:

Well, option 3 is clearly the best one of those three

Problem number 2: a lot of mathematics depends on a leaky abstraction called the “real numbers” (which are fake, and which I may or may not explain at some point). CIA floats exist as a band-aid abstraction in computing to deal with mathematics centered around CIA reals.

Example: the square root of two

Let me give you a really really simple example.

What is x? Well if you remember high school trigonometry, then you know the answer is the square root of 2?

This is the Pythagorean Theorem. The first theorem ever, and easily the most important theorem in mathematics.

Well, there’s a problem. As even the Ancient Greeks knew, there is no rational number with has the property that its square is two.

The argument is really simple. Let me lay it out.

This argument traces back (in different verbiage) to about 600 BC, to the school of the Pythagoreans, in Ancient Greece. This fact deeply troubled the Greeks, because it upset their weird perfectionist aesthetic. Legend has it that when Hippasus leaked the terrible secret—in modern verbiage—that the square root of 2 is irrational, the Pythagoreans took him out into the ocean and drowned him.

But what is x?

The CIA’s answer is that x is an “irrational” number, which is just simply called the square root of 2.

QAnal’s answer is that you’re asking the wrong question. I will convince you that my answer is right.

Let’s get back to the plot. I realized almost immediately that if one backpropagates the following constraints 1. no floats 2. no real numbers 3. no infinite processes —which are intrinsic to computing—back into mathematics, then a lot of stuff breaks, but things end up simplifying quite dramatically.

QAnal’s notation ends up being a lot better. Our logic becomes a lot more clear. Everything is just cleaner and saner. There’s no waffling. Everything is super concrete and super clear. It’s just better.

Programmers out there: how many times have you

A lot right? Like that can be a monthly occurrence.

Well. Mathematics has been stuck on the first bullet point for the last 23 centuries. It’s a miracle that it works even a little bit.

I’ve spent basically the last year going down a rabbit hole of learning this entire new world of mathematics. And being a bit miffed that this new, beautiful way of thinking isn’t standard.

I owe a major major debt of gratitude to Norman Wildberger. He realized these problems about 20 years ago, and has done a massive amount of work in developing what I call QAnal. In particular

We will learn about all of these at some point down the line.

QAnal is genuinely simpler and genuinely easier. And it’s not close. It’s a world of difference.

So. The basic premise is that the CIA has lost its way. It has started relying on joggerlicious abstractions (chiefly, the “real numbers”).

The CIA’s approach has the net effect of introducing angry dragon problems. This is where you introduce a simplifying assumption at the beginning, and you end up paying for it with massive uncontrollable chaotic sprawling complexity down the line.

I’m going to write a post about angry dragon problems at some point. OOP versus functional programming is a great example. For now I’ll leave you with this gif.

What I’m going to do for now is stick to my original premises: