I woke up early today because of the ‘splode ass. Then I couldn’t get back to sleep. Every way I tried to turn, or tried not to turn, set off an avalanche of gurgling, rumbling, and a host of other weird, nameless, onomatopoeically impossible sounds from my guts. My stomach never actually hurt, though, and I’m thankful for that. It would have just been one more thing to be angry about.

Today was Sunday. The day I am supposed to go to the fight and watch my friends and training partners compete. In the morning things didn’t look very good for that.

After three or four highly explosive episodes on my household throne I became suddenly hungry and decided to head to the drivethrough for some breakfast. Looking over the menu I just couldn’t see anything that even remotely interested me, as grease was definitely the last thing I was hungry for. I settled on pancakes, a fillet-o-fish, salad and an orange juice… but by the time I arrived home I felt miserable and worn out so I fell into bed and passed out for a few hours.

When I woke up I still felt horrible, but I also still felt hungry. So I opened up my McDonald’s bag and started to eat… 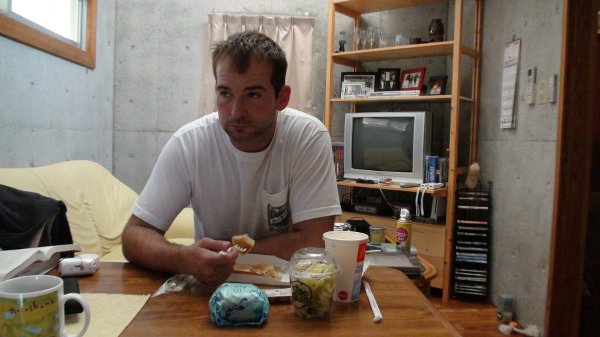 I looked, and felt, like this all morning and afternoon

The hotcakes aren’t so great when they aren’t hot anymore. Actually, they are downright horrible when they aren’t hot anymore. I’m picky when it comes to pancakes in the first place because I make some killer pancakes and I’m picky about ingredients when I cook. Pancakes may be simple, but there are still distinct grades of kickass and ass-kick in the pancake family. This was just ass-kick. They were hard to get down. It didn’t help that I felt bad, either.

The fillet-o-fish wasn’t anything wonderful cold, either. Actually, I think I would have been better off not eating anything and just calling it a day. Yuk. 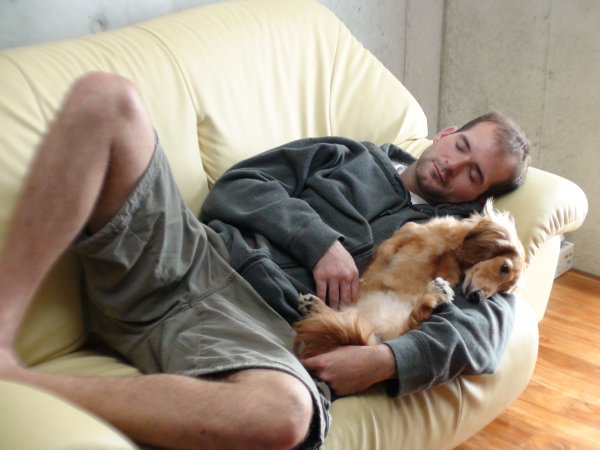 I decided to be lazy with the expert: the dog

I felt pretty bad all morning and afternoon and decided to at least try to make it to the competition to see how things would turn out. I rested all day and took things very slow. I drank a bit more Pocari Sweat and a ton of water and, surprisingly, had my first normal urge to urinate in three days. The frequency of the intense asscapades was also on the decline and I started feeling pretty optimistic about heading to the fight.

I woke up at 4p.m. feeling tired and nasty, but not as completely miserable as I had felt yesterday. I didn’t feel like driving so I decided to try to take a taxi to the stadium to catch the opening bell at 5. As things turned out I was able to stay and watch all the fights with minimal discomfort until around 8:30 or so, when, thankfully, everything was over with anyway and I could make my escape. Yay me!

After leaving I realized that I had an almost normal-feeling appetite for once in three or four days. What a wonderful feeling! I didn’t want to overdo it and I didn’t feel like eating anything complex so I settled on just three cheeseburgers, which turned out to be the cheapest thing I’ve eaten yet. I got them all down without any problems, drank a bunch of water and turned in for the night tired, but very hopeful about tomorrow.

Today was a schedules rest day anyway, so there was no problem with not doing anything. In fact, if being sick was just in the cards for me then these days were the best possible days to be sick, as they covered the least intense periods I have planned. Tomorrow is supposed to be a very heavy day, a 4km run, a full back workout in the gym and 15+ round boxing workout at night. I doubt I’ll be able to complete all of that but I’m going to at least attempt some of it and see how I feel.