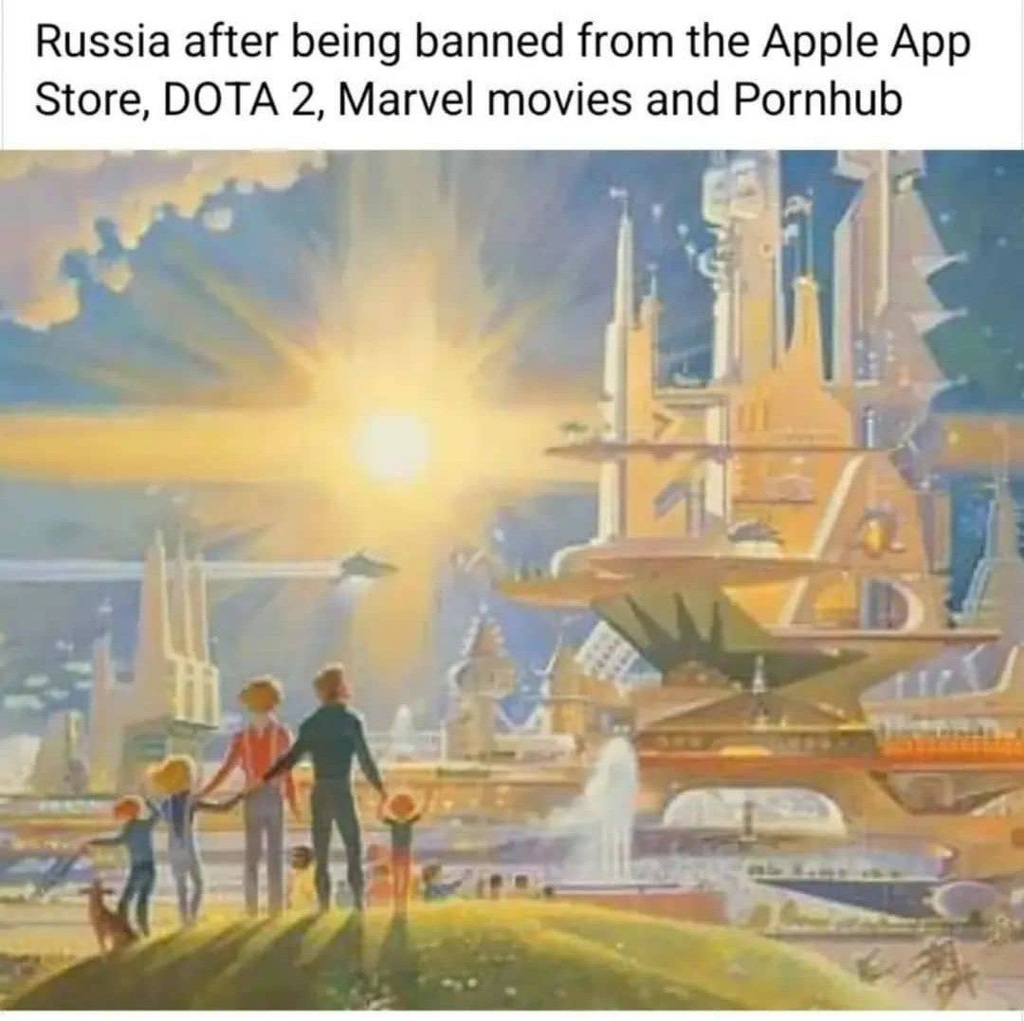 The breakdown on it is that it doesn’t matter – Putin already achieved everything he needs to, so why risk further losses? The media is incredibly full of shit, which is kind of hilarious. Putin just basically ensured that Europe is going to starve itself trying to “block” him.

He’s invaded into Ukraine, yes, but the real attack is against the “everything is fake” version of the European system.

American system too, for that matter, but the US is in a much better position to weather the storm (as is Japan, for that matter). The CCP is pretty much fucked unless they collapse their own economy on purpose (collapse back to central authority control – Mao style).

Putin cut the gas to Europe off today – and the timing of this is fucking hilarious to me.

The fake banks that the fake elites run in the West have been doing their analysis of how the crash might play out and have been performing a non-stop, 24-hour workday scramble to discover all of their “toxic assets” (because everything is so fake that nobody knows who owns what or what anything is worth because until just now it didn’t matter if you were a bank and lost money – the central bank would just shower you with more bullshit money).

That process takes about 10 days, as we say in the 2008 war against Georgia. Well, day 10 hit over the weekend. Monday is the first full trading day.

Over the weekend institutions have been trying to reposition, but they are very limited in what they can do outside of trading hours, so we’ve been waiting for markets to open Monday to start dumping. During the last 10 days retail investors – the little people like you and me – have been told that everything is fine and to just keep buying the dip and other stupid bullshit mantras. Mom & Pop investors have propped up prices so that institutions can rape them in the markets by dumping today.

My suspicion was that we would see the Nikkei (Japanese main exchange index) open down this morning. Well, 10:34 here right now and…

A 3% drop would be a very bad day on the Dow or Nasdaq in the US – we already had >3% drop in the first 90 minutes of trading here.

It will probably get worse throughout the day, then maybe cool off as people start realizing that we are far less exposed than most. I say “we” I mean Japanese companies. However, there are some Japanese banks that have joint venture investments with Western banks like HSBC and they are going to get fucked royally (I don’t think HSBC is going to survive, actually – they’ll probably get completely wiped out once the CCP economy collapses, which is coming).

Anyway… The Nikkei is going to drop today for sure, but the surprise and super scary story for Russia will probably be that they don’t drop as much as the Eurofaggots think it should. “Why is the global market tanking but Russia is actually doing… pretty much OK?” That’s alarming. The faggots in Europe think that they can control the world with their fake banking system the way that Castro Jr. controlled the working class in Canada: by cutting off their money and controlling their accounts.

That’s also why they want to do this bullshit CBDC (Central Bank Digital Currency) bullshit: they want to be able to program your money against you: so that you can’t make choices about it even though it is yours.

They’ll see the Nikkei dip, that will be the trigger to start dropping these asset bombs while the market is still relatively high, and we’re going to go into market meltdown.

That will happen sometime soon – but my prediction is that today would be the real start of it.

And so I find it interesting that Russia cut off natural gas flow just now as markets are waking up and panicking. That’s going to seriously fuck with confidence.

The one think you have to keep in mind is that the Globohomo idiots brought all this pain on the normal people while stealing all their shit through the inflation tax as they went along, used the corporate shill media to trick you into believing, and are now working to make an even more fake version of money that cryptards might not even realize is super fucked up. Black Rock is a perfect example of all that.

The thing to keep in mind is who really did this. It wasn’t Jews, it was people like Klaus Schwab, George Soros, Larry Finch, Eric Schmidt, and Bill Gates – along with the entire pack of idiot fake elites who went along because they thought this was the path to ultimate power.

When you start stringing people up, don’t string up your neighbors, string up the fake journalists, the shills at Vice, the WEF retards, the WHO, pretty much anyone at the UN, the national-level politicians, and any banks involved in the ESG system.

Of course, this is terrifying to these fucking idiots, so they are going to start the anti-kike shilling as fast as they can. They already have actually, by making this narrative that “calling someone a ‘globalist’ is an anti-Semitic slur”. The purpose of this absolutely preposterous narrative is to link the idea of Jews and globalism in your mind so they can scapegoat kikes (again!) for their own fucking retardation, hubris and greed.

You don’t have Weimar Germany, you have a Weimar West – and the same narratives will likely be rehashed (or people will at least try).

Anyway, the wallpost above about the crash is why the details of the Russian invasion don’t matter:

Emotions are really strong on this, especially for people who are directly involved – so it just isn’t possible to really redpill someone on the tactical status of the military action in Ukraine right now, and it isn’t meaningful to anyway, because the important part is strategy not tactics and strategically the Western system is absolutely fucked, mostly due to their own retardation.

The traditional stores of value will remain: commodities (especially food futures), metals, land, pussy, and high competence in any sort of skill that takes time to develop.

Also, if you happen to be a kike living in Europe, leave.

Go to Israel and get a medical exemption for the fake vaccine. When everything goes to shit you don’t want to be “different” in that way among the rabid, angry, confused masses of hyper violent Europeans.

Doubly true if you’re brown or black looking – probably won’t be safe. Congo will probably literally be a safer place to be than Europe if you’re a nog, even if there isn’t any food.

It’s fucking stupid, but this is where we’re going.

The main heat will be coming for kikes and anyone infected with Islam, though. All that other shit will just sort of get caught up in the basket of “undesirables” if various continental countries go full blown Nazi.

Kind of like how the Nazis gassed faggots and gypsies in addition to Jews and so on.

Anyway, in happier news, there is a chance for a cascade of renaissances after the cascade of collapses – and that’s a good thing.

Also in happier news, we might actually get the alpha for this maerket thing going here before too long. That would be pretty slick.

A major wildcard is, of course, whether the worst version of the fake vaccine shit is true.

If it is… I don’t know. Nobody has a well thought out model about how that would work (if a huge % of the population all across the 1st world suddenly developed fast-moving terminal cancer or some other weird shit – or even if just the infertility problem is not temporary).