Day eleven of my McDonald’s-only training experiment went fairly well… at least in terms of be capable of completing all my events today despite recovering from my recent illness. My big challenge today was to get through everything without running out of gas. It was a three-event day so that was a lot to ask my still weak feeling body, but things worked out just fine. 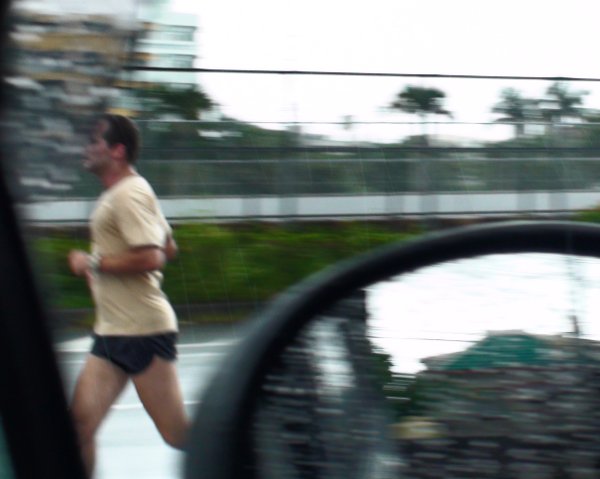 A somewhat unusual photo snapped of me running in the rain, taken from inside a car.

I started the morning off with a 4k run which I completed in 19:58, despite having planned a slower pace for myself. Maybe I just wanted to get it over with. Maybe the rain made it more fun than it should have been. Anyway, 19:58 is how things worked out. Not super fast, but faster than it felt.

I got moving later than I had intended today, but I wasn’t going to let that keep me from training. I’ve found the key with eating only McDonald’s while training is to give myself enough time to let a meal settle in my stomach before starting a new event, so I went to eat as soon as I could manage after the run. I gave it about an hour to settle before heading to the weight room for legs.

Legs is a pretty rough day, even without having the added difficulty of recovering from a stomach flu to complicate things. I knew I was going to feel weak once I got started so I settled on a very easy, flat program for squats today (just 5 sets all at 100kgs) and some straight-leg deadlift for hamstrings. I wasn’t interested in doing any leaping, box jumps, lunges or anything else that required a lot of concentration and balance, so I just stuck to those two exercises. 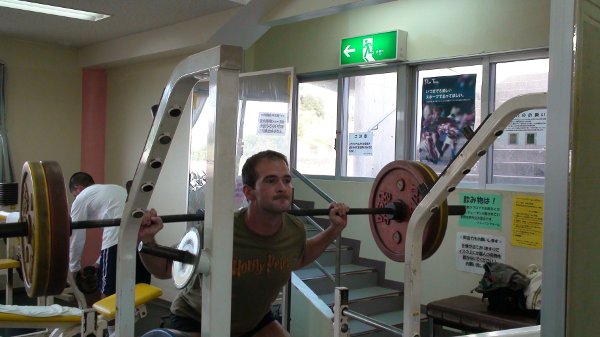 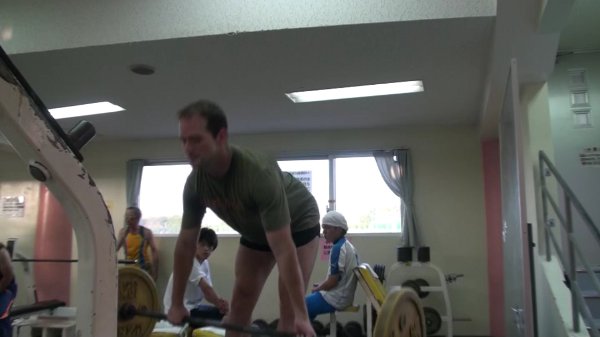 Not a great illustration of this exercise

That’s a lot less interesting (and a lot less difficult) than last weeks’ leg program, but I’m still feeling weak and easily fatigued from being sick. I don’t know how much quickly my strength would come back if I were eating a normal diet, but as things are that’s just not an option. So I’m taking things easy.

Right after lifting I needed to eat again so I could have a little stomach-rest period before boxing. I didn’t want to run out there and puke all over my trainer. Never in my entire life have I tossed my cookies while training or exercising and I don’t think now is a good time to start.

I headed to the gym around 20:00 to start my boxing workout. I didn’t want to push things too hard, but I did want to at least get some good technical work in today. That turned out to be a good plan because about two rounds into heavy bag work I started to quickly feel fatigued so I dropped a lot of my planned punching combinations and worked on my (still terrible) kicking form. 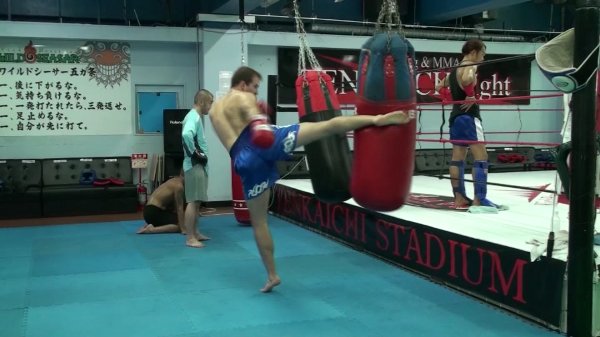 Pow! In pictures this looks great, but I felt tired a lot faster than usual today…

After a few more rounds of heavy bag I got with El to work the focus mitts. He told me that over the weekend he had had the same illness and so had someone else at the gym. I suppose that is where I picked it up myself. Its difficult to avoid the occasional community virus when you’re sweating, spitting and bleeding all over each other all the time. 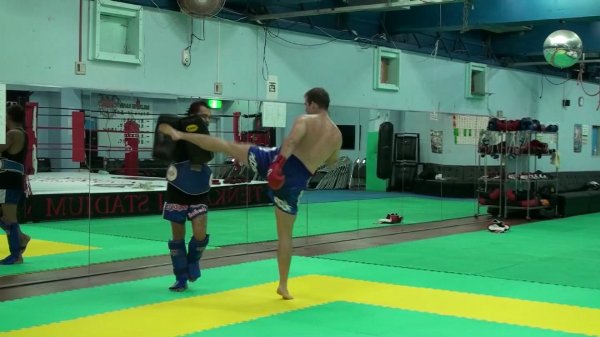 Same thing here: This left kick may look nice but it felt horrible because I was already exhausted by the time we started heavy-mitts…

Here’s how the boxing workout played out in the end:

As you can see, a 10 round workout, while nothing to laugh at, is about half of my normal 18 round program. The entire day was like that, but that is OK. Though I didn’t excel at any particular event today I did — for the first time since I felt sick — complete every event, and that was my goal. I was extremely happy to be able to perform all my planned events today. It was a great feeling to be back in the gym and training again. Hopefully tomorrow I’ll be able to do the same.

Rawr! I’m angry at my salad for feeling like a worn-out wimp so quickly! Raaar!

Of course, after the gym it was time to head back to McDonald’s one last time for some more burgers. I was upset at feeling fatigued so quickly so I decided to take my rage out on my salad instead of the camera girl. I also discovered an alien companion disguised as a cheeseburger, so I bit his face off. Yay me.