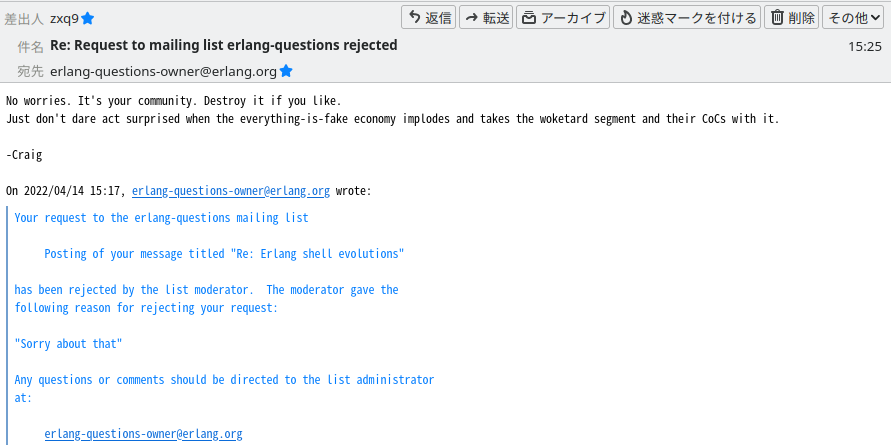 A follow up to “erlang-questions: A tale of push VS pull and authority VS lolberty“…

The Central Authority has Decided that the “Erlang community” now officially consists only of people willing to eagerly submit to having the Woke CoC shoved into everything. Anyone suspicious of this sort of thing has no opinions worth hearing.

See, all discussions about the future of the language and runtime are now mandated occur on the magical forums and not on the boring old mailing list that has existed for decades (and has decades of unbelievably useful and interesting conversations archived on it). The forums are exclusive to those who agree with their ill-conceived CoC that prattles on about “inclusion” and “diversity” and other woke code for “agree with The Narrative or shut up” and programs an eventual woke administrative takeover and self-destruct into the community at its core.

How inclusive of them!

ML is now moderated and you simply can’t post freely, even if you’ve been a figure in the community for a decade or more, especially if the post has anything negative to say about the situation. HA HA!

You dipshits pissed off Richard O’Keefe now. Talk about an amazing owngoal.

Casual readers of this blog may not know who ROK is, but losing his support is… immense.
And it isn’t just him. I’m trying to think of anyone of serious weight and insight that doesn’t call people a “Nazi” or “racist” as a reaction to being put in a tough spot in a debate (yeah, that’s you, Fred — you did that, and it still makes you look retarded) who wants anything to do with the forums.

Prediction: Within 5 years Erlang will become a confusing pile of bullshit because they have effectively banned the graybeards who don’t want the language destroyed from the language roadmap discussions.

Fine. I no longer give a shit. I’ll fork what I need and run off on my own. Burn your garbage pile down. Nothing of value will be lost. I’ll take what I learned here and move on while the subverted, infiltrated and fake “ESG” compliant sycophantic industries that sponsor this nonsense suffocate themselves.