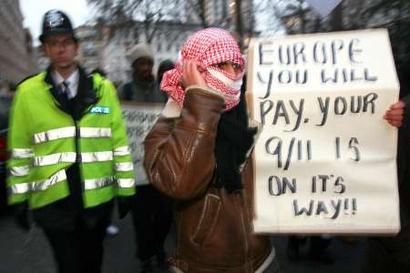 More charming words from a foreign in England. How sweet, they are trying so hard to share their culture.

In other news, this girl is ready to make herself famous! Nice going, Arab Educators, your Kung Fu is definitely stronger than the Korean hate-instilling version. I’m fairly certain that while growing up in Texas if I were to have drawn similar pictures with Mexico, Canada, American Indians, Nazis, black people or even the good old fashioned fun-to-hate Jews as the subject, I would have been suspended at a minimum (and likely gotten my ass kicked at home by my father for being a hate-spouting retard). If American children did this today with Muslim terrorists as the subject, they would be disciplined harshly. Of course, that does not work both ways. If you are a Muslim living in the non-Muslim West that you must destroy, you can file what amounts to an EO complaint and be taken seriously.

But then again, there is no money for Americans, Japanese or Europeans if they write hate literature, develop victim cultures or teach their children to hate. They’re already on top of the world and have proven in the no-holds-barred arenas of science, commerce and war that their cultures are simply more efficient and worth working within and for, living within and for and dying for… though at the rate of roughly 700,000 Muslims to 3,600 Americans so far, the inefficient societies are showing just how drastically more inefficient they are already. That is not sustainable, regardless how many media stunts are attempted to the contrary.

On the subject of media stunts, it still amazes me that Middle Eastern media releases will base an emotionally rousing statement on a completely facetious event. It is even more amazing to me that Western media will take such releases seriously without investigating, despite the inevitable retraction (I suppose that on the balance breathtaking stories are worth more than the slight sting of a retraction, so long as the retractions aren’t too public or too frequent). In this case, the proposed attacks on holy sites is something they pulled straight out of their ass, but the strong-sounding, resolute and unifying commitment to a harsh retribution is what they wish the public to see. Of course they expect, and rightly so, the majority of their target audience to not read the entire article or realize that even the falsely stated threat is not from the United States, but by absence of knowledge the local Middle Eastern media consumer and likely most of the Western media consumers as well will fill in the blank in their mind with the United States or Israel.

[Note on edit: It seems they have already filled in the blank completely, taken down the old story, – which is already now a dead link, unsurprisingly, as it didn’t mention the US 2 hours ago – and the new reality has been woven to include specifically anti-US rhetoric. Its history-changing in action! Amazing. And you saw it here first! Or second… or whatever… this has been going on for quite some time, I’d imagine… Its weird to actually watch it happening, though. I wish I could stay up for a few more hours and watch the story of the story unfold and chronicle it… I should have screenshotted these changes to post them. Damn… missed opportunity.]