Today was Day 17 of my Fast Food Fighter experiment where I eat nothing but McDonald’s for 30 days while following my MMA/Muai Thai workout schedule. I started this just to see what would happen, to present a contrast to the one-sided, anti-establishment advocacy position that Morgan Spurlock presented in his (very well made) docuganda movie, Super Size Me. Throughout my time in various military and para-military organizations I had observed that exercise tended to trump diet in some respects. This led me to maintain the idea that the real enemy of public health is not primarily our eating habits, but our lack of athletic lifestyle as a culture that has led us in the 1st World to become unhealthy, soft and fat. 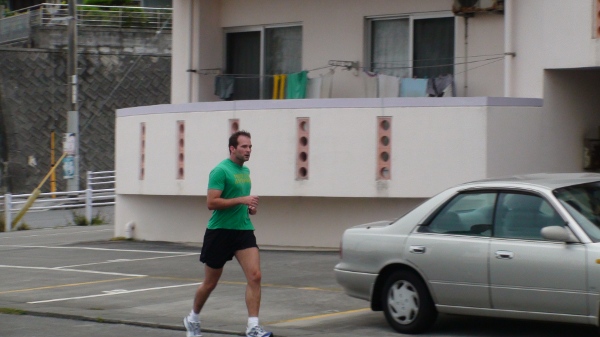 Doing the morning run. Not such a bad way to start the day, really…

I received my mid-term blood test results today and had my second consultation with the doctor and his staff, and the results were stunning. But before I get to that, let’s review how the day went.

I had to get running a little earlier than usual today so I could make my appointment with the doctor. I wound up really feeling my shin splits again despite having been careful about my running technique. My route was the same 4km hill route I normal run and I put in another very normal time of 20:22. Some stretching and walking around after the run reduced the shin splint pain within a minute or two and I felt fine afterwards.

Running early meant I had to eat from the McDonald’s breakfast menu, which I still have not been able to develop a taste for. I tried a McGriddle for the first time, and, well, this is how things went…

After my not-so-satisfying breakfast I headed to the doctor to see what would come of my blood tests. I was really anxious to find out what was happening inside my body. As I wrote on Day 14 when I had my tests drawn I was full of questions about how things were going. For one thing, I wasn’t eating a particularly healthy way at McDonald’s. I had been eating my fair share of fries, double cheeseburgers and Big Macs so there shouldn’t be any real reason I would get different results from Morgan Spurlock’s tests if he was being honest (and fasting prior to the tests to not sabotage the results on purpose) and if exercise was not the more important of the factors involved in the outcome. 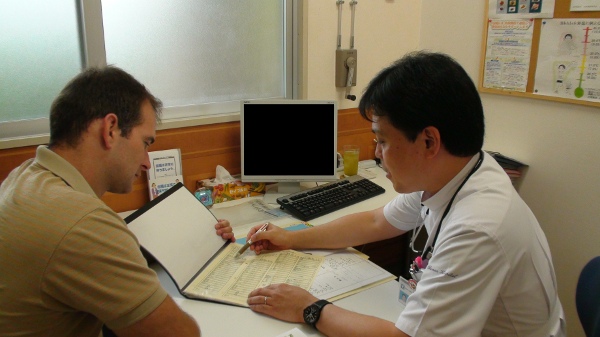 My doctor and I looking over my blood test results, comparing them to Day 0

I had a sit down with my doctor and we both had an interesting surprise that blew both of us away… my blood test results were completely normal. Not just completely normal, but exhibited only minor variations from my initial blood test drawn on Day 0! How could that be? 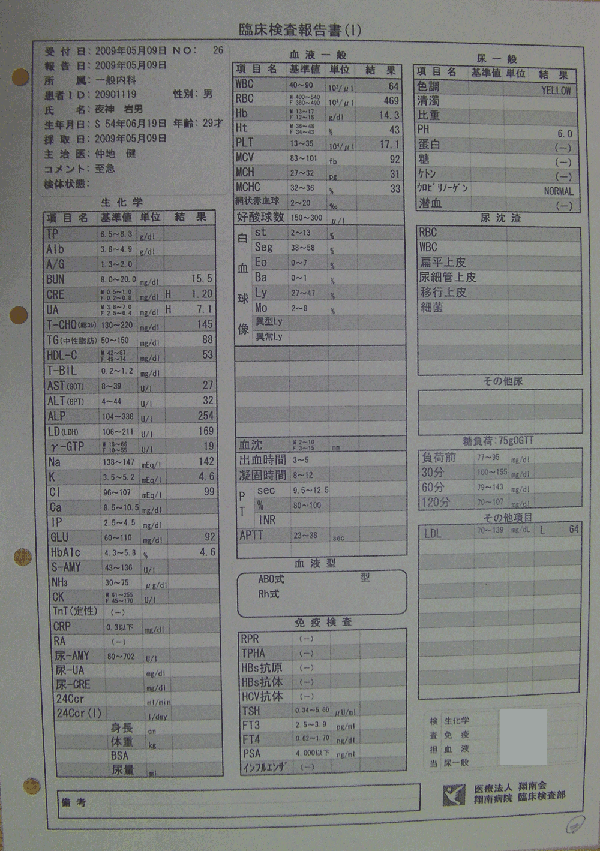 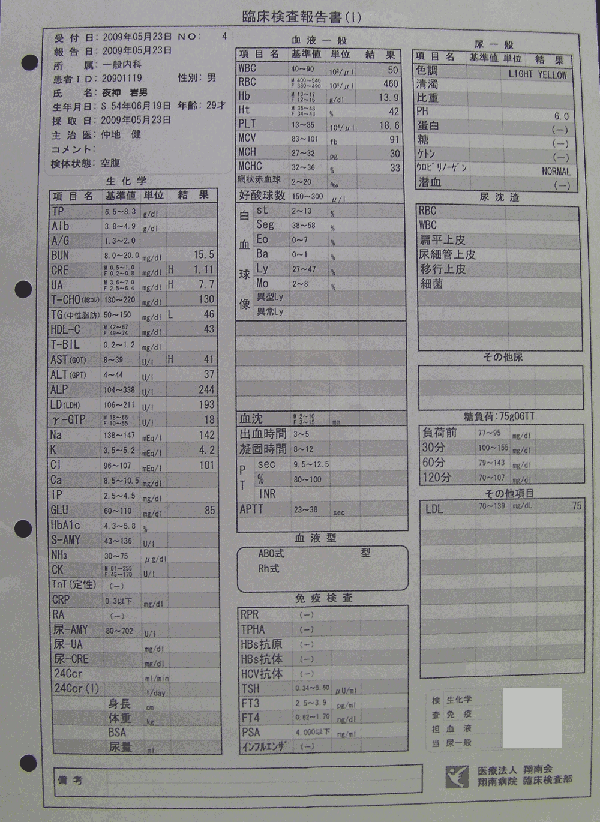 In both tests my creatinine was a little higher than normal, 1.2 on Day 0 and 1.1 on Day 14 — the doctor explained to me that this is a normal occurrence in people who have a significantly larger percentage of bodyweight due to muscle and is nothing to worry about. It should be noted here also that I have never supplemented with creatine in my diet, ever. The amount of variance here, 0.09 mg/dl, is what could be normally observed between blood tests in ordinary adults. My uric acid was a little high in both tests as well, 7.1 on Day 0 and 7.7 on Day 14. The doctor explained that this is also likely due to the level of exercise and sweat I put out throughout the week, as it causes me to void less of the water I consume than I normally would — in other words, I am slightly dehydrated by some measures. This is also nothing to be alarmed about and is normal considering my routine, at least according to this doctor.

My cholesterol levels is where the real shock came in. On Day 0 my LDL — the “bad” cholesterol — was only 64 which is 6 points lower than the usual adult male average. On Day 14 my LDL level was 75, an 11 point increase, but still on the very low end of the adult male LDL index. These results fall directly in line with my last 8 years of blood testing conducted by the military. My medical records show my LDL levels typically range from the high 60’s to the low 90’s across the last 8 years. So both tests are within normal limits for me, McDonald’s diet or not.

My AST and ALT levels both elevated somewhat, with AST elevating the most significantly. These are two liver enzymes (AST = Aspartate transaminase, ALT = Alanine transaminase) that facilitate a large number of repair functions throughout the body. Their function is a bit too complex to get into here but feel free to educate yourself by following the links. The doctor explained to me that the level of elevation in my particular case is most likely a normal reaction to the increased cellular damage and stress I am placing on my cardiovascular system through all of the exercise I am engaging in. Once again, the doctor’s opinion was that my body is responding in a fairly normal and otherwise predictable way to the exercise I am engaging in and it appears that the McDonald’s diet — despite being absolutely against his recommendations as a doctor — is not having any noticable effect on me.

Unfortunately we only have the data of one man — me — to go on here because convincing a large number of people to follow this particular exercise routine at this intensity is highly unlikely. Add to that the the type of people who would be willing to follow my workouts would most likely be absolutely against the idea of eating nothing but McDonald’s for a month and you can see why this sort of test data is difficult to come by… not to mention the difficulty in ensuring that everyone was really putting out at the same level and that everyone was sticking to their diet plans as strictly as I am.

I can state conclusively at this moment, however, that an exclusive diet of McDonald’s has not caused any ill effects, any noticable loss in energy level and has not messed with my blood work at all. In fact my blood work exhibits the signs of a healthy body reacting normally to a high level of athletic stress and my body measurements (posted on the Day 14 blog entry) have improved with a loss in bodyfat % and a 3.3cm reduction in my waistline in two weeks. All this while eating over 4,000 calories per day from McDonald’s! 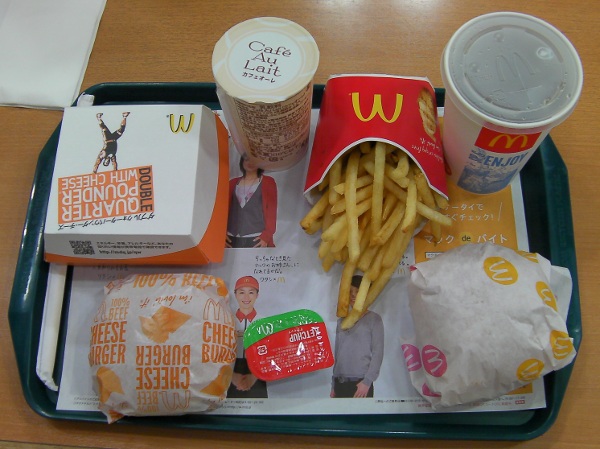 My afternoon meal: definitely not what the doctor ordered

I sent these results off to an American dietician and geneticist to get her opinion on what is going on. I am anxiously awaiting her response. To give her more data to work with I need to tally up everything I have eaten and present her with a breakdown. Its a good thing I have saved every receipt since I started this so I can work the totals out to send her! I am almost afraid to add up the totals of fat, saturated fat, sugar, salt, etc. that I have consumed so far. I’m sure it is a pretty frightening number.

He said (roughly translated): “No, I am not telling you to stop, but as a physician I cannot in good conscience recommend that you continue this.”

He said quite a few other things that were pretty funny to me but they will have to wait until I release the video series.

With my medical consult out of the way I headed off to the gym to get some weight training in for the day but I ran into a snag. It was the 4th Tuesday of the month and as I had found earlier every 2nd and 4th Tuesday of the month the gym is closed for maintenance. I still have access to the bases around here and headed over to the nearby US Air Force base to ask if I could film in the gym. Unfortunately they gave me the correct answer, which was to consult the Public Affairs Office to get permission. Even though that was a slightly frustrating answer the NCOIC of the gym was correct in telling me that. Since 9/11 the military has to be more careful about who it lets take pictures where and for what reason. Most likely if I went to the PAO and asked for permission and explained what I was up to they would say “yes!” The military is actually very accomodating with anything anyone wants to do so long as it doesn’t hurt the military, and most likely the post commander would find my project interesting enough to put his support behind it.

However, that sort of thing takes more than a day to coordinate and I had not thought to plan that in advance. That is my mistake and my payment for that mistake is to miss another chest workout day. I did drive across town looking for another gym that would let me film but unfortunately the only one that would was a gym that only had a mechanical weight set with machines that looked like they were from the 15th century, could not be adjusted to my size (the pins were rusted tight in place), and only had a maximum weight of 50kgs on the chest machine anyway.

So after spending all afternoon running around trying to find a place to workout, soaked with rain because the sky had decided to open up on me as I ran between buildings, I finally gave up and called it a no-weights day.

I headed in to box and had a nice, hard workout. It was a great time. 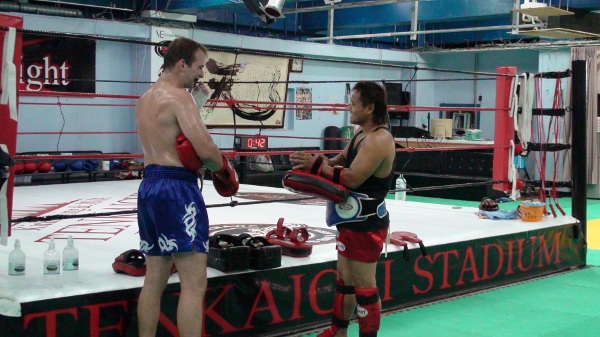 Worn out, talking with Farrap

Once again I did not take any breaks and had a great workout. I did not feel low on energy at any point but once again I did get pretty winded. I was training with Farrap today, not Ell. Farrap has a very different way of making me exhausted: encouraging me to put every bit of power I have in every punch and kick. Its fun to hit hard but it gets pretty tiring in a different way than Ell’s faster paced speed workouts.

So that was Day 17, the climax of my anticipation over how my blood tests would turn out. I had a good workout, got a clean bill of health from the doctor and so far it seems that McDonald’s isn’t the Devil after all.

15 thoughts on “Day 17, Test results are back — Very interesting results”