My legs felt tired this morning but my heart didn’t so I felt like doing a longer run that involved less hills than my usual route. My normal run route involves some huge elevation changes and I didn’t want to have my hamstrings or quads get overworked and tighten up because that usually screws up my boxing workout later in the day. 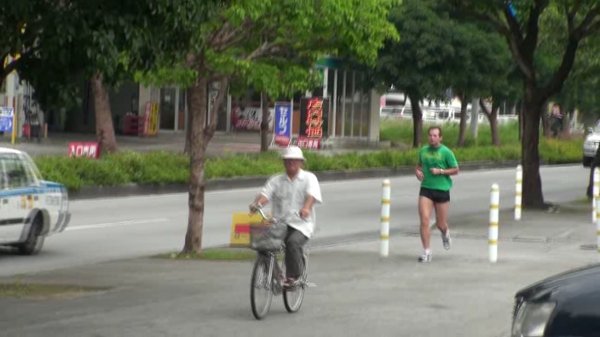 Coming back down the huge hill

I picked a route that is 2.8km one way and should have been relatively flat. I was totally wrong about that and I greatly underestimated the number of major intersections between my starting point and my turning point. This was a big mistake but all I could do was laugh at myself for having chosen such a bad route. It turns out this route is one very long hill, in fact it is so long and has enough curves that looking down the street it is difficult to perceive the incline because you can’t see the beginning or end of it. The intersections all involved huge delays and on my way up the hill I was stopped at every light for what seemed like forever. I did jumping-jacks (side-straddle hops) to pass the time at the lights, which turned out to be a bad idea because it really worked my already strained shins and calves over a little too much.

I wound up putting in a 5.6km run time of 31:01, which is significantly slower than any other run so far. That’s OK. I picked a bad route. I was delayed numerous times, traffic was horrible and the route which I picked for being flat turned out to be one incredibly long incline.

Sometimes I screw up like that. Its really not a big deal. I did get cardio training out of it and I did complete my run for the day, so it certainly wasn’t a waste. A bit frustrating but definitely not a waste. So now I learned something new about that route: its a hill.

My planned weight routine for the day was shoulders but I had run myself out of time and had to choose between lifting and boxing. In this particular case boxing is more important than lifting because getting better at fighting is my focus and that has little to do with being a musclehead.

I headed to the gym and Farrap had some new things planned for me. I went through my usual jumprope, shadow boxing, heavy bag routine but instead of mitts today Farrap had me practice evasion and blocking — from baseball bats. I figured he would be nice and try to work me into it slowly because those things hurt. I was wrong. In his mind I would most quickly learn to be quick if he swung them fast. He was correct, actually. On the ones I was supposed to block I managed to always have my guard up in time, but those were relatively slow. The ones he wanted me to evade he swung very fast and the fear of getting smacked in the leg really hard by a bat made me move a lot faster and I wound up never getting hit.

Not getting hit doesn’t make it un-scary to have a stocky little Thai man swinging baseball bats at my legs and body, though. 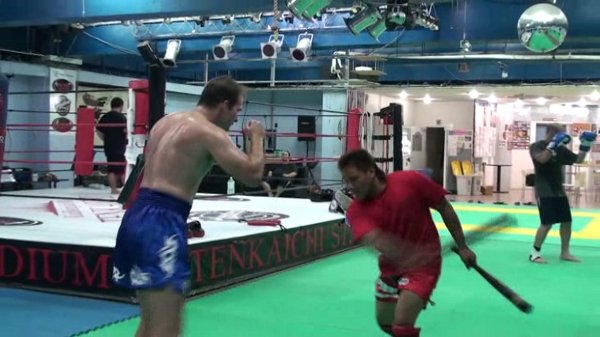 Farrap trying to give me whelps on my legs

My boxing workout was not as intense today as I had thought it was going to be, but I certainly learned more about balance, reaction time and moving the right parts of me out of harm’s way while keeping my poise. It was a good lesson day.