Its day 21 of my McDonald’s experiment and I made it to the weekend without keeling over. Now I have a few rest days ahead that I feel are well deserved. I didn’t do much today but that was just fine. In fact, I did so little that this particular blog entry will not be much more than a place holder. I didn’t set my alarm and woke up when I felt like it, I ate amongst what seemed like a million screaming kids at McDonald’s, rented a movie and just relaxed today going to the park and feeling unpressured by anything. 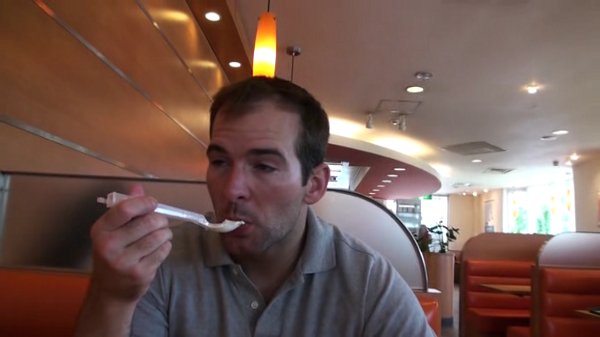 Mmmm… Ice cream… Pretty much the culinary highpoint of the day

The most interesting thing about the whole day actually was how many people were at McDonald’s today. It was Saturday. The weather was amazing. There are a million things to do around here that are exciting and very fun when the weather is good and none of them involve McDonald’s. So why were so many people there today? It is interesting that the majority of the customers were Americans but the demographic of that area is largely Japanese. It is near a huge American air base, but there are a lot of things to do on and off the base that don’t involve going to McDonald’s. Anyway, in the end I suppose they go there because they like it… its just not the sort of place I am likely to go to on Saturday.

Speaking of that… Friday nights are also crowded at McDonald’s and the customers are usually American also. Maybe when they are drunk they stick with something that is familiar, and McDonald’s would be it around here. That kills me to think about though because an amazing variety of culinary treasures await anyone willing to ditch the invididually possessive nature of western restaraunt orders and take the time to learn how to read (granted, not an elementary task in Japanese). The food, drinks, and atmosphere are really great at the local å±…é…’å±‹ but I suppose that sort of thing is not what the younger American folks are into. For some reason Japanese people go out to drink together strictly to have fun — not to meet girls, get into fights or simply get wasted. You will almost never hear a Japanese guy ask his friends if they want to get fucked up over the weekend or go chase bitches at clubs… but its pretty common to hear between Americans talking about the weekend. I suppose its just a deep cultural difference that will not be bridged. As far as I am concerned, however, discovering new foods, places, people and drinks in the company of my friends is the fun part to me, so I’ll stick with that.