A long time ago John Gilmore (same link at Ask.com, in case Wikipedia gets defaced again) observed that the internet tends to perceive censorship as network damage and routes around it. An incident in China this week has proven that not only is that the case, but it also appears that under certain social conditions the internet not only perceived censorship as damages and finds ways to circumvent it, but that official censorship can easily cause the censored data to proliferate at a far greater rate than if left alone. 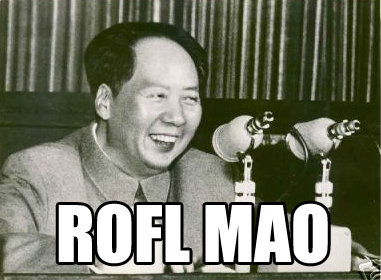 The even which brought this to my attention was the internet rumor in China that Zhou Xiaochuan (the Governor of the Central Bank of China — a fairly high ranking governing party position) had charges brought against him for losing $430 billion in Chinese government money on U.S. Treasury Bill investments, had disappeared and was making an effort to defect to the United States. There are, of course, many levels at which the details of this story do not make sense, beginning with the idea that a $430 billion loss on U.S. T-bills was even possible, but the idea that a leading party figure may have gotten on the wrong side of the controlling party in China and was making an attempt to flee to the West is not completely without precedent and not outside the realm of solid possibility.

Where the rumor started is a little difficult to track down, but that doesn’t really matter. It was discussed all over the social networking and alternative media (Chinese blogs, etc.) as well as brought up in web chat rooms and in-game chat all over the country. The government tried to shut the discussion down and the attempt failed miserably despite the state directed deletion of web pages, official censorship instruction to media outlets and search filters which blocked or blanked web searches related to Zhou’s name, the Central Bank of China, etc. All of this was futile, of course, as censoring team chat inside of an application such as World of Warcraft would be extremely difficult for anyone to pull off effectively and censorship of phone and text conversations related to such a limited topic without a blanket disruption of all data service is impossible.

So… the rumor grew. And it grew on the back of the fact of censorship itself. The censorship was giving fuel to the fire. A common conversation between conspiracy minded internet users goes something like:

“Hey, I just heard Zhou Xiaochuan got in trouble for losing a bunch of state money and defected to the U.S.! He’s disappeared and now the government is trying hard to shut the story down. Tell your friends!”
“I don’t beleive that, that’s gotta be bullshit. He’s a bank governor, why would he defect?”
“You think it’s bullshit? Try searching for his name anywhere on the net. It’s all blanked or blocked. You can’t even get a return for a search on him from financial websites.”
…does a search… “Whoa! Something must be going down, because you’re right, I can’t search for him anywhere!”

And thus the Internet Hate Machine drives on and smacks the face of the state censors who are inadvertently acting to proliferate information on the social layer by trying to censor it at the technical layer.

This sort of phenomenon is having and already has had a huge effect on the way information relays and proliferation play out across the world. Free societies have largely already explored the new dynamics and have adapted — which was an easy thing for, say, the U.S. to do as the government there doesn’t make much of an effort to censor anything, ever. But in societies such as China and Russia where inforamtion censorship is a key element of social control, and social control is something that their existing political power structure absolutely must maintain to effectively run the state, the effects are going to become increasindly interesting and unpredictable as economic, social and military stresses increase over the next few years.

The issue I wanted to discuss is the idea that censorship can backfire, particularly in an environment which has tuned itself to expect a high level of governmental and institutional interference with the free exchange of information and ideas. As a side note it is interesting to learn that the U.S. government refuted the rumor itself today though an official refutation by the Chinese government has not yet been made. Could he have defected? Maybe. A single person defecting, though this person is a significant player in the Chinese government, is not as important as the overall dynamic of how internet rumors can undermine any information control scheme and that any efforts at control have a high chance of backfiring and expanding the influence and distribution of the rumor.