It is a well known fact that the rest of the world’s leaders wait on a solid foreign policy direction to come out of any new American President before deciding how to chart their own course. When you’re the captain of a fishing boat it is important to know where the giant aircraft carrier in the harbor is planning on moving next so you don’t get in the way, waste your energy fighting its wake, or identify whether an opportunity to surf its wake and save yourself some trouble is in the offing.

Despite my continued assertion that idiots cannot survive long as world leaders (sometimes this is different than being a president — observe that Egypt’s true power structure has had little to do with who is actually sitting in office), that nations by and large get the governments that they deserve, and that people often unconsciously pursue personal goals which inadvertently end up promoting the interest of the society in which they live the Obama Administration still shows absolutely zero signs of declaring any clear foreign policy direction after being in office for over two years. The closest thing to a foreign policy that President Obama has settled on is shifting the focus of American war efforts from Iraq to Afghanistan. In all other areas he is simply following the Bush-era playbook yet executing the plays somewhat more poorly and with far less style. The only changes here from Bush’s plan is that Bush had already begun a withdrawal from Iraq and planned to keep a small contingent there to block Iran (Obama seems to have made no decision on how to deal with Iran, apparently shocked that our trouble with Iran is practical and not merely rhetorical in nature), withdraw from Afganistan sooner than later and refocus on the emerging challenges posed by Russia’s rise, the fragmentation and likely eventual demise of the EU, shifts in Asian power and so-on. Obama has prolonged and intensified the war, not shortened it. So much for the Nobel Peace Prize.

In general it is a good thing to continue existing foreign policy — like the aircraft carrier I compared America to in the first paragraph it takes a long time to turn an organization as large as America (or, conversely, the world) around — but after a few years in office the rest of the world tends to start wondering what is on the American President’s mind if they still don’t know. The Obama administration’s rapid policy shifts have come to look a lot less like political agility and a lot more like ultimate indecision.

With that in mind, and with a reminder to how the Obama administration decided to toss plans at coherent policy advice coming from the Department of State (headed by a much older and apparently wiser — “evil” though she may be — Hillary Clinton) regarding the civil unrest in Egypt, I’d like to bring your attention to current goings on in Libya.

Libya is more or less an artificial country. It is not a nation in the sense that it is one people who share common cultural cues and inhabit a more or less contiguous geography with internal lines of drift and external barriers to invasion. Instead it is a cobbled together mass of tribes which are at constant low-level war with one another. Only a supremely devious, strong and cunning (in a word, “competent”) leader has any chance at keeping such an artificial country together, and that leader has until now been Ghaddafi. Ghaddafi has been a fun character for political writers and politicians for years, serving both as a convenient boogey-man when a need to talk shit about iron fisted dictators arises and, critically, as an actual iron fisted dictator who is capable of keeping Libya calm and quiet, generally void of international jihadist groups (that is, since Ghaddafi mended his ways after the Lockerbie Bombing) and a reasonably sound energy trading partner for Southern Europe (particularly Italy).

But now everything is all haywire. The rhetoric of anti-dictator shit-talking is so engrained both in the press and in the mouths of politicians that the critical value of Ghaddafi as the one man who could keep a lid on all the angry festering chaos that is Libya is necessarily overlooked in the interest of being politically correct. As I noted before, the press is even now still calling rebels “protesters” in the interest of demonizing Ghaddafi’s armed challenge to them, though this is beginning to slowly (finally!) change. That there is no real alternative to Ghaddafi is not a very popular thing to talk about just yet, nor are the consequences of emboldening anti-government movements all across the most screwed up parts of the world.

But national-level politicians, security professionals, geopolitical thinkers and deeply srs Gentlemen! all appreciate the irony of demonizing Ghaddafi publicly while he is teetering on the brink of losing power while desperately praying that he can get a handle on things. Everyone in power today hopes to see him crush the rebels and provide an overwhelmingly brutal example of why the smellier parts of the world should just simmer down and accept the status quo once more. We are as afraid of giving jihadist populations true democracy as we are blindly intent on actually promoting the spread of democracy. It is anathema to declare that anyone is not ready for democracy, despite that being the case.

Along this line of thought we have two almost comical developments: the U.S. asks Saudi Arabia to arm the Benghazi rebels and Senator John Kerry says that cratering Libyan runways and imposing a no-fly zone over Libya is somehow not military intervention. I should note here that the first link is to a story fantastically titled “America’s Secret Plan to Arm Libya’s Rebels” which is funny because the plan isn’t so secret if the press is talking about it. But whatever. Obviously the U.S. planned for this information to get out, which in a sense is an indication of how not serious this plan was in the first place.

Two things should immediately leap out at the reader:

Two more things should jump out at the reader after a bit of reflection:

A lot of noise is being had all around the world, but make no mistake: nobody will or wants to make any concrete moves against Ghaddafi until a viable alternative to him is found. Everybody’s favorite option is to delay action by deferring all decisions to “comittee” or “coalition consensus” or whatever indefinitely in the hope that in the meantime Ghaddafi actually regains his iron grip on Libya thereby preventing the need for any acrual action to occur. Everyone wants to then talk smack about him and how bad he is, chastise him for putting down a rebellion (the implication being that the governments doing the chastising are morally superior*), and go get busy fixing the natural gas and oil infrastructure in the country.

It will be interesting to see how things go. It is clear that the Obama administration is not much closer to making a decision on any of this than they are on how to deal with Russia’s resurgence, Iran’s intransigence, India-Pakistan relations, or the increasing potential for an internal failure in the Chinese system. The news stories above do the typical news thing and go to greath length explaining and recounting arguments (wind) between concerned parties that have little to do with whatever is actually going on in the country of prime question, in this case Libya. All this discussion whether or not Saudi will help arm rebels in Libya (almost defnitely no) or whether or not intervening with the military is military intervention (almost definitely yes) meanwhile everyone is hoping Ghaddafi takes full advantage of the delays and gets a grip on things. 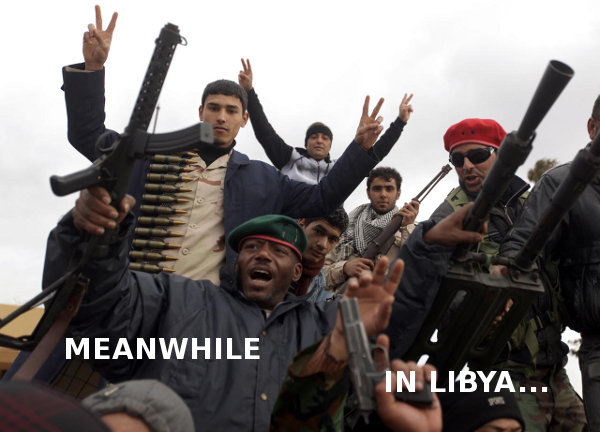 [*All this despite the fact that I’m sure Berlin or Paris would be more than happy to attack Bayern or Normandy if they were to attempt to seceed or engage in an armed contest with their governments, whether or not “protesters” were involved.]