I was contacted yesterday (or was it two days ago? I’ve since flown across the international date line, so I’m a bit confused on time at the moment) by the product manager for DBsign, the program that is used for user authentication and signatures on DTS (and other applications? unsure about this at the moment). He was concerned about two things: the inaccurate way in which I described the software and its uses, and the negative tone in which I wrote about his product. It was difficult to discern whether he was upset more about me making technically inaccurate statements or my use of the phrase “DBSign sucks”.

Most of the time when someone says something silly or out of turn on the intertubes it is done for teh lulz. Responding in anger is never a good move when that is the case (actually being angry about anything on the internet is usually a bad move, one which usually precipitates a series of bad judgement calls and massive drama). Mike Prevost, the DBsign Product Manager for Gradkell Systems, not only knows this well, he did something unusual and good: he explained his frustration with what I wrote in a reasonable way and then went through my article line-by-convoluted-line and offered explanations and corrections. He even went further than that and gave me, an obscure internet personality, his contact information so I can give him a call to clear up my misconceptions and offer recommendations. Wow.

That is the smartest thing I’ve seen a software manager do in response to negative internet publicity — and I have quite a history with negative internet publicity (but in other, admittedly less wholesome places than this). So now I feel compelled not only to offer a public apology for writing technically inaccurate comments, I am going to take Mr. Prevost’s offer, learn a bit more about DBsign (obviously nobody is more equipped to explain it to me than he is), and write about that as well.

The most interesting thing here is not the software, though — it is the wetware. I am thoroughly impressed by the way he’s handling something which obviously upsets him and want to ask him about what motivated his method of response. When I say “obviously upsets” I don’t mean that his email let on that he’s upset directly — he was quite professional throughout. Rather, I know how it feels to have been deeply involved in a knowledge-based product and have someone talk negatively about it out of turn (actually, it can frustrating to have someone speak positively out of turn in the same way). I’ve developed everything from intelligence operations plans to strategic analysis products to software myself and I know that one of the most important aspects of any knowledge worker’s world is his pride and personal involvement with his work. This is a very personal subject. Just look at the way flamewars get out of hand so fast on development mailinglists. I still have epic flamewar logs kept since the very early days of Linux kernel development, Postfix dev mayhem and even flamewars surrounding the Renegade BBS project. While the decision to use a comma (or a colon, or whatever) as a delimiter in an obscure configuration file may seem like a small point to an outsider, to the person who spent days ploughing over the pros and cons of such a decision or the people who will be enabled or constrained in future development efforts by such a decision it is very personal indeed.

Unfortunately this week has me travelling around the globe — twice. Because of that I just don’t have time to call Mr. Prevost up yet, or make major edits to anything I’ve got posted, but I’m going on record right now and saying three things: 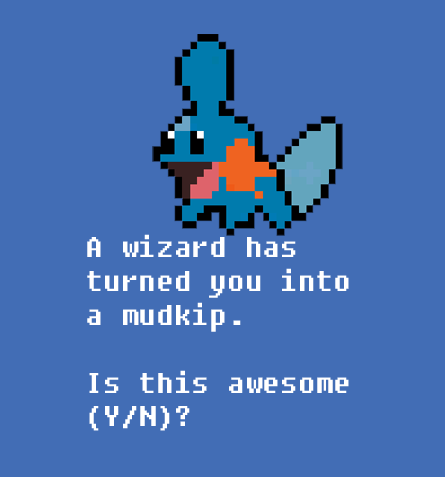 So yes, I’ve been turned into a mudkip.

The part in point 3 above about Mr. Prevost being open to recommendations, when fully contemplated, means something special (and I’ve had a 16 hour flight and two days in airports to think about this): Great managers of shitty software projects will eventually be managers of great software projects; whether because they move on to other projects that are great, or because they take enough pride in their work to evolve a once bad project into a great one.