I was asked if I was interested in covering a temporary administration position a few days ago because finding bilingual Unix people is pretty hard here in Japan. It sounded marginally interesting and stood a chance of getting me in touch with the local Unix community, so I said sure, have the interviewer give me a call.

One day the positioning agency asked for a resume. I sent one in. The next day at 3pm I got a call saying that I would get a call an hour later to conduct a phone interview.

At 5:30 I called their office back to say that I didn’t get a call. They called me back asking if I’m still available today — I tell them that if its OK that I’ll be playing with my kids then I’m game. They call back again telling me that the company is really going to call this time but from the office in Yokohama, not Okinawa — I’m fine with that. They also told me that the guy calling would “be a foreigner, like you” — I’m fine with that, too.

Not a minute later I did get a call but not from Yokohama, and from a foreigner but not “like me”. The call was from India over the world’s worst connection.

This amazed me. For one thing it was 2013. I expected bad connections when calling across multiple satellite hops from contested jungle territory in Southeast Asia in 2004. But this was a lot worse than that, and this guy was supposed to be calling from an office. And he supposedly works for a high-tech company looking to contract me. It bears mentioning that you could get crystal-clear cell connections from most of Afghanistan in 2010.

So that was the first weird smell. The second hint of rotten tuna was the voice. I couldn’t, for the life of me, understand most of what he was trying to say. I’ve never been one of those “You gotta speak ‘merican!” types (hard to justify it being an expatriot myself), but if you’re going to speak English it should be English and should be intelligible, if not at least generally correct. Otherwise speak Japanese, or German, or get an interpreter, or have someone else do the interview — I’m open to any of the above. If you do know English but have a heavy accent, just slow down. But such ideas are lost on some people.

His speech had a magical pattern to it. Merely missing syllables or mushing sounds together like most non-native speakers was beneath this guy. He set a new standard for unintelligible second-hand language by injecting new syllables and sounds into each word.

The deft ease and fleet pace at which he mangled the language makes me think in retrospect that he probably considered English to be his first language. Maybe it was just taught to him wrong as some sort of cosmic joke. It was what speech would sound like if you could somehow hear a hash salt being added to it. This blew Pig Latin out of the water.

An abridged transcript of the conversation follows: 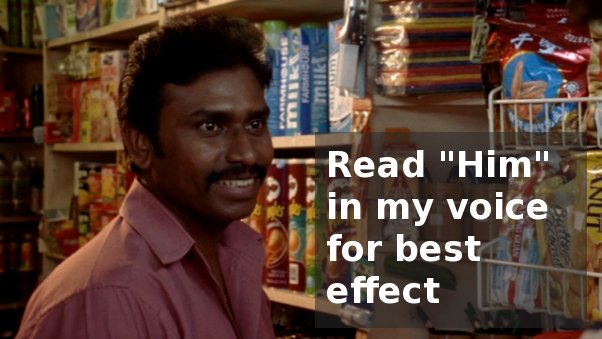 This was the weirdest interview experience in my life. It is like a trick they would pull you at Robin Sage but this guy was for real; no OC is going to come evaluate me on how I did and counsel me how to better deal with the crazy and ambiguous.

Now for the scary part. This is the new face of IT outsourcing. Think long and hard whether you want to trust your data integrity and the construction of business systems you expect to get reliable answers out of to companies that have trouble communicating with their own (prospective, in this case) subcontractors and employees.

Since this is Japan, I wonder how on earth they manage to conduct interviews of Japanese people?

Am I alone here? Has anyone else ever experienced this sort of thing? (Other than when calling Dell or Microsoft tech support and being redirected to India, that is.)

12 thoughts on “Interview from Another Dimension”