I stumbled on an interesting statistic today at the Department of Justice website. According to the 1999 NHTSA alcohol related incident survey, 15,935 people died in alcohol-related automobile crashes in 1998 alone. This was only 38% of all traffic-related fatalities. By that math about 41,934 people died in 1998 in traffic-related incidents. That’s just 1998. That’s just traffic. 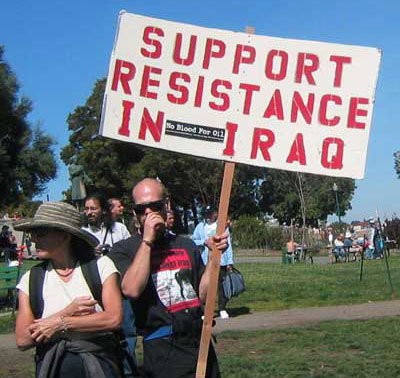 We are freaking out about 3,850 soldiers having died in Iraq total over a period of four years and 8 months. That number is completely damning to the President because the Democrats want the White House very badly, and most of the media intends to give it to them, come what may. The other day a nutbag protester even menaced Condoleezza Rice with fake blood, insinuating that “our boys” in Iraq are dying unnecessarily and the blood is on her hands, blah blah blah <Republican-hating whimper>.

When we committed to a regime change in Iraq, we knew it wasn’t going to be easy. We projected tens of thousands of casualties with an open figure for the play-out of the insurgency. We told ourselves it wasn’t going to be easy. We were wrong. It was strikingly easy, everybody who stood in our way ate a Hellfire sandwich and got quiet. Our expectation of difficulty has become our own public enemy. We defeated the most powerful army in the Middle East outside of Israel, and we’re freaking out about 3,850 deaths? Wow. We’re victims of our own badassness…

If these people who get so uptight about causes and things would stop for a moment and take a breath, they might realize they have missed the real threat to American lives. Its not the Iraq war, its car crashes – or anything else that kills more than 825 Americans annually. Car crashes are worse than the Iraq war and 9/11 many times over. As Team America so aptly put it: “Its 911 times 100”. Literally. And then some. But nobody cares. It could be anything, but whatever. I stumbled on amazing car-crash statistics so that’s my example for today. It could be children improperly placed in cribs suffocating to death every year, that’s a crazy high number too, and much more tragic as they are children who have no control over how they were lain in there by negligent mothers. At least the soldiers (like me, for example) who go places on behalf of the US volunteered to do it. Nobody twisted my arm and made me sign up.

What cracks me up about all this? Here’s the punchline: When liberals realize they are not making any headway with the argument that Muslims really don’t want to kill us all and everything is our fault for being productive citizens (generally they give this up when they do a little research and realize this isn’t a secret the Muslims are trying very hard to keep) they switch tracks to the “Why are we sending our sons (and daughters) off to die in a foreign country to ‘help’ Iraq rebuild when we have so many domestic issues here at home to worry with?!?!? What about the TREES! And WHALES! And… and other stuff! Ugh… I have a caffeine headache, let’s drive to (Starbucks/alternate ‘non-corporate-dog’ coffee shop) in my huge SUV and drink some processed coffee bought from murderous dictators and tribal lords who control Sumatra and Jolo…”

Why is that funny? Because the thing they themselves are making a big issue of is the war, which is precisely the sort of thing they claim to be railing against. Drawing all this attention to the war draws attention away from things we actually could control a little bit more merely through public awareness, which is precisely the sort of thing those whiny, incessant, kitty-loving voices are perfectly suited for – and the sort of causes they profess to believe in. Besides, its pretty obvious that a 22-year-old music student / aficionado of reality enhancement knows little to nothing about the international political or social climate terrorists who want to kill his God-hating self operate and live within. His reality and theirs are entirely different. However, this particular type of person who spends so much time and energy being anti-stuff-he’s-very-detached-from is much more plugged into the community of people who drive cars while heaps of THC are present in their system than, say, I am. Within that community he would have a much greater voice. Besides, it is in no way going to score him social cool-points to tell his friends to lay off the pot before they drive somewhere… What’s he going to do, put bloody dolls in their mailboxes with little Emo and Credit-Card Hippie uniforms on?

As a side note, I find it extremely difficult for me to weight the military-strategic imagination of a graphic designer from Los Angeles the same as the educated opinion of a fellow Green Beret who has been in Iraq and Afghanistan for 3 years.

As a second side note, here is another Iraq War death fun-fact: 3,850 deaths in Iraq in 56 months. 3,131 (according to the AP, not the military) are combat-related in some way. That means 81% of the deaths are combat-related, which leaves 19% as completely non combat. In other words, we are only losing 4 times more people to combat in Iraq than we would have lost over the same period were we similarly deployed on a massive construction exercise, conducting training with a friendly nation, or sitting around post picking our noses. Accidents are the leading cause of death in the military by a large margin. Its more dangerous to be near an incompetent and overconfident Army forklift operator than to go on combat patrols in the Infantry. That is probably why AFN is stacked pretty heavy with accident, tobacco and suicide prevention campaigns (in that order) versus combat lessons learned awareness training information.

I’ll add relevant and interesting photos and things as well as cross-link more if I have the time and anyone ever bothers me to do so. Sorry for the lack of that sort of thing today, I’m just too tired.