There is a potential for Hezbollah to become an entity independent of national support. What does it mean for us? I will here try to (briefly) explore how Hezbollah could become an independent organization and further how that would effect the games currently being played in their name as well as the games being played through them by sponsors. 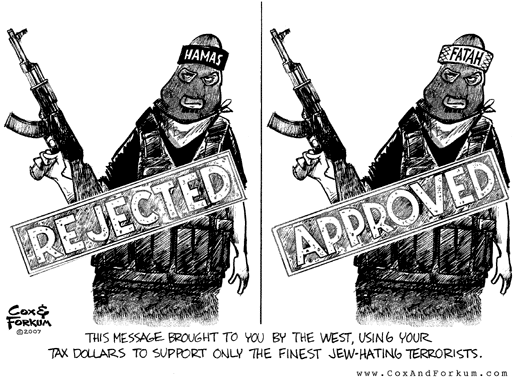 Hezbollah has always filled the role of the extra-national, deniable and politically inexpensive force of choice for Islamic states who feel the need to make a violent statement against civilians without the tangle of being directly blamed for the death and dismemberment of kindergarten students or other such victims. This group emerged from the chaos of the Lebanese civil war, gained the massive sponsorship of Iran and somewhat of Syria and have since become the single most powerful indigenous political influence in Lebanon. This influence was largely paid for by Iranian money, material and direct training support. Hezbollah has outgrown its original narrow focus on Jew-killing and political mayhem over the last few years and has initiated moves which are far beyond that limited scope. Hezbollah has opened hospitals, civil offices, political arms, media outlets, illegal narcotic production and distribution systems, and even schools — where they appropriately teach/preach the mass destruction of all Americans, Europeans and Israelis as well as (it is hoped) literacy and mathematics. Hezbollah is Shiite and is accordingly a long-term threat to Sunni-dominated countries where they are currently setting up shop for an apparent massive future expansion at the request of Iran.

Though Hezbollah got off the ground through the deep and intense direct support of Iran and Syria, it has taken on a life of its own. Starting up a political arm and creating a physical civil presence that exists for any purpose other than terrorism operations tends to slowly force a terrorist force to moderate itself. Survival through only external support also threatens the long-term survival of any group and for the senior leadership in Hezbollah who have effectively created long-term careers out of being professional Hezbollah leaders the chance that it may someday be politically unpleasant for Iran or Syria to continue supporting Hezbollah is unacceptable. For this reason Hezbollah has developed its own revenue-producing arms which specialize in local taxation, sale of weapons and military expertise and the production and sale of illegal narcotics. Hezbollah has been blacklisted by just about every government that means anything and this also does not bode well for the long-term career plans of the senior leadership. For an example of how to overcome this they look south, to the PLO and even Hamas (as terror-oriented as they still remain) for examples on how to normalize. For this reason they have sponsored their own hospital, educational and political initiatives and are trying to slowly reshape their image.

This sort of a transformation begins to soften not only the image but also the realities of such an organization. The realities of political entanglement (starting within the Lebanese political process and extending internationally), the internal drive to increase controllable revenue (i.e. sales), limit dependence on uncontrollable revenue (i.e. donations), and otherwise improve the prospects for the long-term survival of the organization begin to change the aims of the group in fundamental ways. In other words, today’s Hezbollah is at least as much about Hezbollah’s own survival as it is about the “fight against Israel” or whatever else Iran asks it to do. This is an irreversible and unstoppable process. No group wants to be reliant entirely on the outside for support, and the transition from an old-version Hezbollah which was basically part-timers who fought for money and perceived grievances is significantly different from the Hezbollah of today which is staffed primarily by full-time careerist operatives and leaders with technical and operational expertise unique to the scope of each position formed. This formalization and careerist shift will slowly dictate a slow weaning of Iranian and Syrian support and an eventual split from Iranian control and ideology.

The end result would be a Hezbollah which attempts to gain civil control over Lebanon, will likely spin off and rename its extended surrogate Hezbollahs for use as its own extra-national and deniable terror group (in Iraq, Kuwait, Saudi Arabia, Qatar, etc.), an increase in narcotic export, an interest in developing legal alternatives to narcotics revenue, and an eventual request to be recognized as a political movement rather than a terror group. In short, it will try to copy the “success” of the PLO. In doing so, however, it will alienate many of its truly radical members. Hezbollah will cease to be the Hezbollah that we know and will eventually become a political entity far removed from its terrorist roots. The violent, radical elements are a fundamental feature of the failed culture of the modern Middle East and will remain, but they will no longer be welcomed by Hezbollah despite what will likely be continued and violent-sounding anti-Semitic rhetoric. If Hezbollah actually achieves political control in an area such as Lebanon, the last thing on their agenda would be a war with Israel.

In short, Hezbollah is on a path which will result in its slowly becoming more pro-Hezbollah than anti-Israel. Iran is going to eventually need to find another surrogate actor to carry out terrorist activities and will find its adopted prodigy child soon coming of age, gaining independence and maturing to the level of a sometime competitor with its own agenda in the surrogate-terror sponsorship game.

I haven’t given enough thought to how Israel will wind up feeling about such a transition, but my initial thought is that Israel would welcome any group which could place a stable government in Beirut, Islamic or not. Overall it would be a good thing for everybody if the lawlessness in Lebanon were to end and if the government were even somewhat democratic the ruling party (assumed to be Hezbollah) would be forced to moderate itself to prevent another civil war. Hezbollah would never be strong enough to firmly control Lebanon and all its diverse groups and would never survive in politics without aiming to secure loose control in the interest of stability versus strong control in the interest of domination. For these reasons I believe Israel would welcome Hezbollah’s evolution toward politics and away from terrorism. Iran would hate it, but they could not really do much about it. Lebanon would be lost as a safe-haven for terror groups and Israel’s northern border would be more secure. But currently Israel still seems to be ramping up for some sort of military action against Hezbollah and just because Hezbollah may someday become a self-moderated and independent political entity does not mean it is anything close to that today or will move in that direction for a while — particularly not while Iran is in a tight spot and accordingly willing to pay through the nose to ensure Hezbollah does its assigned job of menacing the world.