So now it is the 14th day of my McDonald’s-only exercise experiment and I am heading in for medical testing. I had my bodyfat percentage, height, weight and tummy circumference measured as well as my blood taken for a full lipid panel and blood count. Everything I did on Day 0 was repeated today. 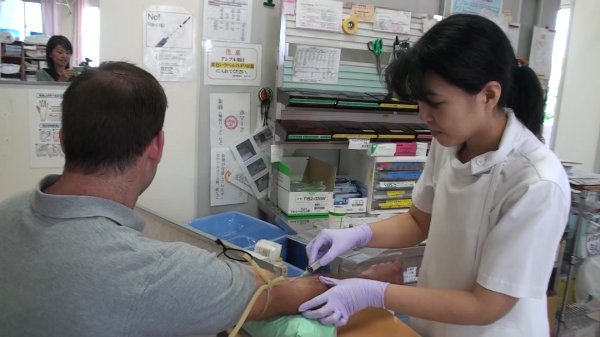 Getting my blood drawn… my favorite part…

In the event that my experiment demonstrates that exercise is the key, personal laziness is to blame and there is nothing inherently evil about McDonald’s I’m certain detractors — with their emotional penchant for discounting anything that does not promote their personal position — will point out that I am one or two days off from being at the exact middle of my experiment. Unfortunately this is the real world where I have to compete with other patients for routine testing appointments and I was unable to secure a blood draw date on Day 15 (it is a Sunday) or on Day 16 (it is a Monday and they do not do blood draws then). In fact, though I can get my body measurements today and give blood samples, I will not know the results of my blood tests until Day 17, when my doctor is available to give me a consultation and appear on video once again. 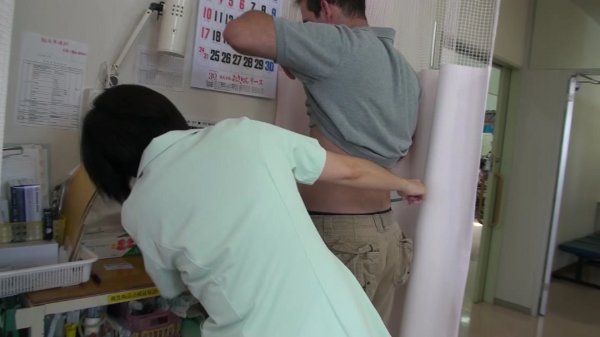 Having my belly taped — a mildly humiliating experience

As things stand currently, however, I can report only on the preliminary results of my body measurements and how I have felt through all of this and compare these to my predictions and the predictions of an American dietician I consulted prior to engaging in this experiment. 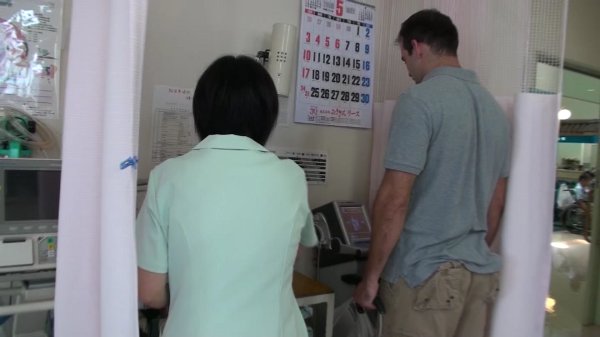 Having my body composition electrically measured

So far tallying up my calorie intake totals I have consumed, on average, about 4,000 calories per day for exactly two weeks. All of my calories have come from McDonald’s with the exception of 3.46 liters of Pocari Sweat (an elecrolyte solution) which I consumed during my worst period of dehydration while I was sick with gastroenteritis (caused most likely by a rotavirus). I have also consumed one multi-vitamin tablet per day, the details of which I will post with my complete consumption pages later when this experiment is complete (the multivitamin does not contain more than 100% of the FDA recommended daily levels of any specific vitamin or mineral and is the same that I have been taking before this experiment began). 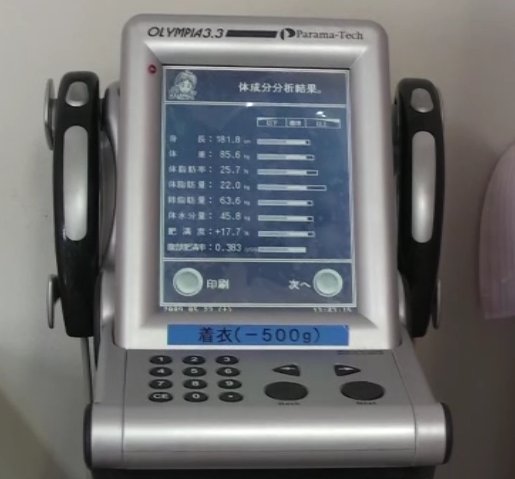 This dietary pattern has been pitted against a boxing/combatives workout program that I put together for myself based on previous competition train-up programs I have followed for jiu-jitsu and grappling tournaments in the past. Generally the program involves three to four mid-distance (defined as between 3 to 7 kilometers) runs per week, five to six weight-lifting workouts per week (each focusing on different specific muscle groups), and five to six boxing workouts per week.

I have not been keeping daily dietary notes as I go, but rather tallying up the caloric intake after the fact. I also have not pre-planned any specific pattern for my food intake, but have been following my mood at mealtimes. I also have not timed my meals throughout the day or planned a specific number of meals per day. I eat whenever I have time and feel hungry, I eat whatever I feel hungry for at the time (so long as it is from McDonald’s), I eat everything I order (no half-eaten burgers, and I have video evidence of everything I’ve eaten which will be released later), and I eat as many or as few times as feels appropriate to my body for each day. 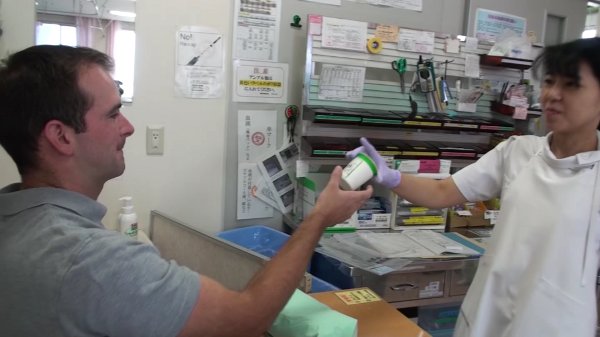 Nothing like the old-fashioned way to test kidney function: pee in a cup…

My workout is planned and scheduled on a day-by-day basis but the time within each day for each event is not decided and is entirely flexible. Generally speaking, however, I tend to run before I eat anything each day, and runs come before lifting, which comes before boxing which is always last. I am flexible within my workout schedule, however, and have missed days due to illness. All of this is logged in detailed notes I am keeping as well as being visually documented by video. All of this information will be organized and released at the conclusion of the experiment so that there will be no unanswerable questions about my performance.

All that being said… in two weeks of eating only McDonald’s and working out I have lost 3cm from my belly measurement, dropped 2% of bodyfat and lost 1kg of overall weight. 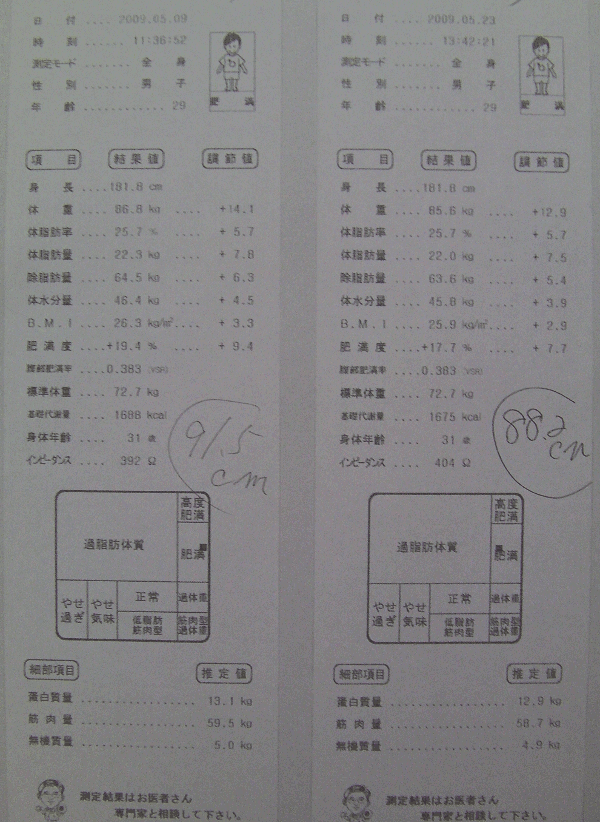 My actual result tags from the clinic. To be specific, I reduced bodyfat by 1.7%, my belly slimmed by 3.3cm, and I lost 1.2kgs.

These are the only results that I can state at the moment because I do not yet know the results of my blood work. My body measurements, however, directly contradict the findings of Mr. Spurlock in his movie, Super Size Me, and my results are fully documented whereas we never got to see the supporting information about what and when he ate or what he did or did not do throughout his day. We do know, however, that exercise was specifically forbidden to him by his own rules, and this represents an absolutely unrealistic scenario when discussing health issues. Anybody could get fat and unhealthy in the span of a month in the event that they intentionally overeat to an extreme degree (no matter what the dietary makeup is) and make a conscious effort to not exercise.

Based on body measurements I have demonstrated that one can eat exclusively (and at ~4,000 calories/day, significantly) from McDonald’s — the organization which Super Size Me specifically sought to attack — over a two week period while still exercising vigorously and reducing overall weight and bodyfat percentage. In fact, a 2% reduction in bodyfat in a two week span is a fairly substantial achievement, no matter what diet or exercise program you’re on (outside of the Auschwitz diet, of course).

I’ll refrain from celebrating this finding as evidence against the position that corporate America — the general ideological iconic entity which Super Size Me was groundlessly assailing — as represented by McDonald’s is engaged in some conspiracy against mankind. I will refrain from celebrating these findings as such evidence until I have my bloodwork results back, that is. The fact is I do not know how my bloodwork looks and it is entirely possible that though I may have reduced my bodyfat percentages and by all external mesaurements am healthier and more athletic than when I started, I could in fact be getting more unhealthy in many hidden ways. My kidneys or liver may be headed for impaired function, I may be developing diabetic tendencies, I could simply have a massive cholesterol imbalance that predicts cardio problems way down the road if I don’t mend my McDonald’s habit. There is no way I can know these things without seeing the results of my bloodwork. Simple as that.

If my bloodwork comes back with bad results, meaning that I am, in fact, becoming more unhealthy and burdening my body with this extremely high-fat diet, it will simply be a confirmation everything that we think we already know: that this sort of a high-fat diet is unbalanced, unnatural and not a healthy lifestyle option. From the flavor and enjoyment point of view I can tell you already that this is not an enjoyable diet and I am absolutely sick of eating hamburgers at this point.

If, on the other hand, my bloodwork comes back with perfectly normal results then I will have a lot of questions to ask a lot of medical people. It would mean that perhaps we either misunderstand the relationship between exercise and dietary effects on general health or perhaps that the time scale of change within a body is something we do not fully understand. It may also be that the body, when stressed, can adapt to certain changes and delay the onset of unhealthy conditions without being able to fully outrun them. Who knows. I certainly don’t.

At any rate it is clear that whatever the results wind up being they will raise some questions in light of the very positive results of my body measurements taken today when compared with the measurements on Day 0.

It is also clear to me that it logically progresses that McDonald’s is a company focused on making money from its consumers and that this is the reason for its creation. They cannot make much money if what they sell is a known toxic substance. They also cannot make money if their products are not in demand. Ultimately the customers make these decisions with their wallets, and if people didn’t buy french fries and double cheeseburgers it is a sure bet that McDonald’s would not have them on their menu. The differences in how people make decisions with their money are readily apparent if one travels between regions and countries and looks carefully at a McDonald’s menu for the differences. Salads and vegetable juice are normal menu items in Japan, beer is a normal menu item in many places outside the US, uber-healthy fad-diet options are becoming common in many American McDonlad’s locations which simply mirrors the common availability of highly contrived, non-traditional food items across the US. This is a market trend, not a conspiracy.

I’ve sort of gone off on an anti-conspiracy tangent here, but that is really the point of all of this. There is no corporate conspiracy against any of us. We are the ones conspiring against ourselves every time we decide to eat out instead of learn to cook, drive the kids one block to school in the SUV instead of making their fatasses ride their bikes, skip out on sports with the neighborhood club instead of being an engaged member, buy a spa membership instead of getting involved in a real athletic hobby. We have bad personal habits. We are to blame, ourselves. If you are an unsufferable fatass then you should look in the mirror for someone to blame. We talk a lot about “taking responsibility” these days but we supplant the actual taking of responsibility with talk about it. Ultimately, I believe that this is the nugget of truth that will be uncovered by my experiment. So go eat your cheeseburger, fatty, then get in your car and drive 300 yards to your driveway.